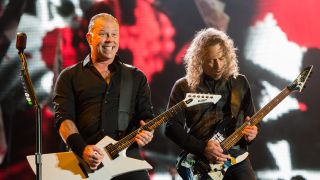 When Metallica embarked upon their 23 month Wherever We May Roam tour in the summer of 1991, they produced a tour programme with a difference.

Alongside the traditional glossy band photos, the San Francisco band chose to mock those who’d sneered at their ascendancy by re-printing a series of caustic reviews in the programme’s pages. Pity poor Paul Maldonado Jr of the El Paso Herald Host, a journalist who reviewed one Metallica show mentioning a song the band had never played live at that point (The God That Failed) and another song that doesn’t actually exist in their catalogue (“to their knowledge [Metallica] have never written a song called Carry On”, the programme read). So pleased were they by this wheeze, that the quartet pulled the trick again later in the decade, emblazoning the cover artwork for their Whiskey In The Jar single with all the scathing reviews the cover version had garnered following it’s inclusion on the Garage Inc. album.

When the band’s official event T-shirt for Glastonbury was unveiled, they revisited this tactic again, printing a collection of negative notices on the reverse of their Peace, Love & Metal shirt.

When you’re the biggest metal band in the world, it’s pretty easy to laugh off the haters, but there’s a certain chutzpah involved in gleefully appropriating that negativity, even if the methodology is tried and tested. That smart-ass move alone would have been enough to demonstrate that Metallica weren’t about to kowtow to the chattering classes and media commentariat, but there was more in store.

Before the band took to the Pyramid Stage, they premiered a specially commissioned film, produced by the acclaimed British film maker Julian Temple – the man who made ‘The Great Rock ‘n’ Roll Swindle’ for the Sex Pistols, a smart reference which will have gone over the heads of most of those who viewed it – juxtaposing archive footage of ‘Tally Ho’ English toffs on a fox hunt, with documentary footage of four murderous bears on a killing spree. If you haven’t yet seen the clip, we won’t spoil the ending for you (check it out below) but its intention – to wind up those aggrieved over James Hetfield’s former role in bear hunts – was clear. Strike two to Metallica.

Metallica’s final piece of passive-agressive piss-taking was more subtle. Ahead of a crushing version of Sad But True, James Hetfield took to the mic, to dedicate the song to to “all the British heavy metal bands that have been dreaming and still dream of playing this stage”, a gently barbed comment clearly aimed at a certain British metal singer who’s taken every opportunity to criticise the band’s decision to play Glastonbury. Your move at Sonisphere then Bruce…

And then there was the gig itself. Let’s be honest, the ‘debate’ over whether Metallica could or should play Glastonbury was ended by the time the ‘Die! Die! Die!’ breakdown of Creeping Death echoed across the Somerset countryside. Was it the best Metallica gig ever? Absolutely not. But for 100 minutes on a rainy night in England, the biggest metal band in the world proved exactly why no-one has toppled them from their perch in the 23 years since the Black Album was released. For all the Twitter frenzy and clickbait media scaremongering, there’s no doubt who’s woken up this morning with the biggest smiles on their faces.