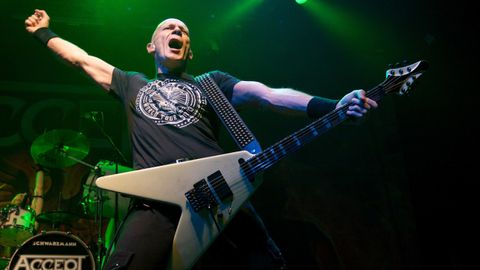 Accept formed in Germany in the 1970s, and their roots can be traced back to the late 1960s. Are they one of these Krautrock bands we hear a lot about these days?

Very much not. They’re a heavy metal band, who finally settled into a unit in 1976 in Westphalia, originally comprising guitarists Wolf Hoffman and Gerhard Wahl, bassist Peter Baltes and vocalist Udo Dirkschneider, who are all to do with the nascent German metal scene of 1980s rather than Kraftwerk or any of that lot. Not a synth or dab of lipstick in sight.

And they’ve been going continuously ever since? That’s some sustained rocking, right there.

Well, no - their progress has been marked by a number of hiatuses and personnel changes over the years, usually in the vocalist department. Dirkschneider decided to go it alone as a solo artist in 1987. Then, drummer Stefan Kaufmann suffered one of those mishaps to which heavy metal drummers are prone if Spinal Tap are any guide, injuring his back badly, bringing group activities to a halt. Plus, they weren’t getting along too well with new vocalist, the American David Reece.

So that was that? (Obviously not, if they’re still around, but tell us more)

In 1992 they got back together with Dirkschneider and made a couple more albums, culminating in 1996’s Predator before drifting off to do solo projects, then coming back together then splitting up again. Dirkschneider would eventually resurface in a guest appearance on an album by Eurovision Song Contest winners Lordi. However, in 2009 Balte and Wolf Hoffman spent a weekend jamming and decided to have a go at Accept Mark III - or IV, or V, one loses count.

And this is the Accept we have before us today. New album any good?

Well, according to its own strictly metal lights, it’s highly serviceable, with vocalist Mark Tornillo having bedded in well these last five years. He’s a New Jersey resident and, like many who hail from that redoubtable state, knows his rawk, and delivers the goods, Judas Priest-style.

So, is it the usual heavy metal nonsense about big-legged vixens from Venus fighting dragons ridden by the mighty Thor?

Actually, no - despite the furious looking fangster on the front cover, this isn’t quite the usual X-Box histrionics of metal past. The title is to signify what Hoffman says is “The feeling that … no matter where you look (in the world), it is blind rage that let people do the most absurd things.” Meanwhile, the lyric to Wanna Be Free is in their best socially conscious traditions, calling for an end to human trafficking, and while we’re at it, crime and poverty too.

So, hearts in the right place, then?

Indeed. And the power chords too.