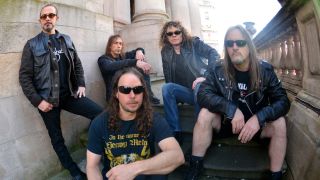 Indestructible thrash metal veterans Overkill are back with their 17th studio album, the blistering White Devil Armory. We spoke to irrepressible frontman Bobby ‘Blitz’ Ellsworth about 35 years of neck-wrecking riffage, surviving the rock’n’roll rollercoaster ride and the unerring magic of thrash fuckin’ metal…

Overkill have been so consistent over the years. How do your aims and goals change and how do you keep things fresh from album to album?

“It’s kinda funny. I think the reason we’ve been consistent is that we’re really not goal orientated. We don’t sit down and talk about what we’re gonna do next or say that we’ve been riding some wave since Ironbound. Shit just keeps happening for us. I think it’s more based on a work ethic. If you work with a guy like D.D. Verni for 30 years and it’s more about a nod and a wink these days because we know each so well. It’s really simple and it’s about communication on a subtle level. We just know what to do. It’s about rolling dice, drinking beers and making the best music we can in the shortest amount of time possible.”

Is there something special about thrash that makes it so versatile and open to reinvention?

“There’s a real value to it. It’s action versus reaction metal and I think probably it’s also that it’s not a thinking man’s game. If you over-think thrash metal, you’re bound to fuck it up. There’s a great value in it and it warms my heart to see three generations of fans at shows. You think ‘What the fuck did we get ourselves into?’ Whatever it is, it’s great! Ha ha ha!”

Tell us about King Of The Rat Bastards… it’s a definite contender for song title of the year!

“Besides being the greatest Overkill title ever! Ha ha! I was on the internet one day and I saw that and I thought ‘Shit, I’ve got to make that mine!’ We started working on a thread for the record, which is armoury. D.D. is always thinking bigger and about the show, but I’m always thinking more immediate. I said ‘How can we turn this title into something that drips with experience?’ After I heard his riff, I started fucking around and listening to some old Ian Gillan tunes. I thought ‘What would Ian Gillan do with that song?’ There’s a ton of shit you can do. It’s wide open. It has a great element of Overkill thrash, it has the riff, the chunk, it motors along. I love that dirty title, man. We don’t normally mess in politics but I was thinking about a couple of people in California, like Diane Feinstein… she thinks she can tell the rest of country what to do. You know what? The reason you’re far, far away on the Pacific coast is that the rest of us don’t want anything to fuckin’ do with you, you know? The Mississippi River was put right down the middle of the US so we could break the fuckin’ thing like a cookie! Ha ha ha!”

Overkill started in 1980, which makes next year your 35th anniversary. Can you remember what the band sounded like right at the very beginning?

“Oh man, I remember when D.D. and Rat Skates walked into the rehearsal room when I was with a guy named Rob Pisarek, it was in his parents’ basement in a place called New City, New York. These fuckin’ guys came walking down and I’d never seen so much fuckin’ leather in my entire life. It was summertime and 90 degrees and they were both wearing leather jackets and leather pants and you could hear them fuckin’ jangling from miles away. I thought ‘What a couple of scumbags!’ Ha ha ha! Like, what kind of person would wanna hang out with these fuckin’ degenerates? They added punk to what we were doing, which was traditional and New Wave Of British Heavy Metal. We were playing Maiden songs and Riot songs, and messing around with Tank and Angel Witch. Those guys brought in the Dead Boys and the Sex Pistols, and we all loved the Ramones. We threw it all into a bag, and that’s what we sounded like. We’d play Ain’t Nothin’ To Do by the Dead Boys and go straight into Murders In The Rue Morgue by Maiden. We were a covers band and it was cool, and somewhere between the two genres, Overkill came out. We had that punk energy but the musicianship from metal.”

You earned your ‘Blitz’ nickname in those early days. How out of control were you back then?

“I think it was Billy Milano from S.O.D. who called me the original New York stagediver, because I’d always take one step too far because I couldn’t see the end of the stage due to being pickled! Ha ha ha! It started becoming a cool thing at Overkill shows. I always had an appetite for things, I guess. I remember my Dad sitting me down one day. I was in the university in New York called Manhattan and he busted his balls to get me in there. The band started taking off and we got a record deal about four years later, and I told him ‘Look, I’m leaving the university…’ and he said ‘Bobby, are you sure this isn’t just about free beer and girls?’ I said ‘No, pops, this is about art!’ So 25 years later I was doing some benefit shows for a big New York baseball star and he was a big metalhead into everything from Flotsam And Jetsam to Kreator and whatever. This guy wore the shirts and he was the biggest sports star in New York at the time. He said to me ‘If you ever need anything, ask me!’ and so I asked him for a special box seat for my father’s 75th birthday. My father and I sat there, watching the baseball game and drinking beer and eating hamburgers paid for by this big sports star and my father looked at me and said ‘I always knew this Overkill thing would work out!’ I looked back at him and said ‘Pop, when I left university it was totally about free beer and chicks!’ Ha ha ha! It all comes around, man.”

Did you ever think the band would last this long?

“I’m not long-sighted, man. D.D. is much more of a planner. I like to eat what’s on my plate and hopefully I’ll get another meal later, another opportunity. Those two personalities work for us. We don’t miss the day-to-day shit and we don’t forget to plan for the future. But I never thought we’d last this long. Not a chance.”

You’ve had a brush with cancer and suffered a stroke in 2002… how did you manage to come back so strongly from those experiences?

“It’s funny… regardless of what happened to me… if those things hadn’t happened to me while we were on the road or if shows didn’t have to be cancelled while my face was cut to shreds by a surgeon’s knife, I probably wouldn’t have told anybody. I would’ve kept that private. But shit happens and 17 records later I still consider myself bullet-proof. Maybe that’s the key to getting through shit like that. When I got cancer I was stone cold sober for ten years and I was in a club with a bunch of guys and I was all bandaged up. This one guy said ‘It’s not about the problem, it’s about getting through the problem…’ and I thought ‘Holy shit!’ It was a lightning strike, you know? It got rid of all the ‘poor me’ bullshit. I just had to get through it. I owe a lot to that cat to changing my outlook. So when the stroke came along, I didn’t give a shit. There’s always a lesson to be learned.”

Presumably you’re hitting the road with a vengeance to support this album. Does touring get harder as you get older or do you still live life to the full?

“That’s a good question! When you have a new record like White Devil Armory, one of the cool things is that it has many of the elements of Overkill. It has the groove, it has the thrash, the song PIG has that punk element… we just get excited and it’s business as usual. Tours have been planned. There’s a US tour and a European tour and we’ll come back to the UK too. We were with you guys in March and it was fucking great. Does touring get harder? Yeah, maybe a little bit. But we understand what we need to do to make it right and that’s to consolidate the touring in a shorter timeframe but to do more shorter timeframes! You do 17 shows in three weeks and you can perform at a high, energetic level. We never take people’s money. People pay to come see us. Whether we’re in our 50s or our 20s, we always take the same approach and we love it.”

Overkill’s new album White Devil Armory is out now via Nuclear Blast. Get it from iTunes here.