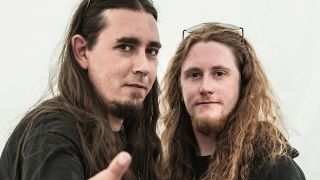 He replaces Ol Drake who left the Yorkshire band in 2013, leading to a period of inactivity for the metal heroes.

They launched their search for a replacement in October and received hundreds of applications, but bass player Joel Graham tells TeamRock Radio’s Metal Hammer Magazine Show they opted for someone local as well as extremely talented.

He also admits they did consider calling it a day when Ol Drake – brother of frontman Matt – left the band.

Graham says: “We had to step back and ask what do we do from this point. We thought it would be a shame to stop it right now. We had to find the right guy, that’s taken time. I appreciate people have been waiting for news but we’ve got to spend time with this guy, get on with him, travel with him and he’s got big shoes to fill.

“We’re still good friends with Ol, we can’t not be, he’s Matt’s brother. He made his decision and we respect that. We kind of realised that the last four years have been manic for us and we decided to take some time off. Then we put it out there if anyone wants to send in an audition tape. Being a northern band we wanted someone on our doorstep.”

The audition process was an enlightening experience for the band, with some of the applicants taking entirely the wrong tact.

Graham adds: “They were terrible, not so much playing-wise. It’s just people’s attitude. People saying I could wipe the floor with Ol Drake, he’s shit compared to me. You don’t stand a chance of getting in this band with an attitude like that. We want a nice guy, someone we can get along with.”

The band didn’t rush making the appointment and they won’t rush the new guy into work either, with his first gig not lined up until March next year.

Piers says: “We’ve had passing chats and had been talking for a while. But I got in touch when Ol left and it went from there. It was time to get on to something else and expand out and Evile was the perfect opportunity. I’m massively grateful to these guys for letting me come on board. I’m learning all the tracks. Ol’s a fantastic guitar player so it’s not easy trying to work out his solos. We’ve got something in the pipeline for March.”