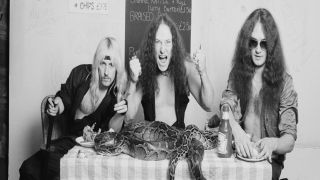 It's been 35 years sincethe release of At War With Satan, Venom’s third and arguably most daring album. A clumsy but ferocious concept piece recounting an apocalyptic battle between Heaven and Hell (and yes, this is Venom, so Hell wins in the end), it was an album that consolidated the malevolent trio’s status as one of the most important and controversial metal bands to emerge during the early 80s.

With hindsight, Venom would be entirely justified in proclaiming themselves to be the single most influential and significant metal band of the last 35 years, not least because without their grubby dismantling and bloodthirsty reconstruction of the whole genre it would be hard to imagine where the likes of Metallica and Slayer would have found their sonic starting point.

Much has been said over the years about Venom’s chaotic and punk-tinged approach to making the heaviest music imaginable, but it is worth remembering that At War With Satan offered much more than the band’s staple diet of three-minute blasts of ugly noise belched from the depths of Satan’s gut.

Somewhat uniquely for the NWOBHM era, the album’s title track is just one single, 20-minute epic that, despite audibly stretching the band’s technical abilities to the absolute limit, amounted to a bold and innovative statement of malicious intent.

Coming as it did after the glorious jab-and-uppercut combo of first two albums Welcome To Hell and Black Metal, it certainly confused the fuck out of many of Venom’s fans at the time and remains a record that polarises opinion amongst their fan base, but for my money At War With Satan is a misunderstood but bona fide classic.

The fact that certain major record stores removed the album and its mildly devilish artwork from their shelves, worried about the UK’s then embarrassingly outmoded obscenity laws, merely adds to its goofy allure.

This album pissed off all the right people, while sustaining its creators’ reputation for taking heavy music into darker, dirtier and more palpably insane territory than anyone else had even dreamt about at the time.

That sprawling title track is the obvious centrepiece, of course: its frequently cack-handed transitions from one belligerent riff to the next exposing the limitations of Venom’s muso chops but the sheer audacious, fuck-it-let’s-do-it abandon of the whole thing ensures that, unless you are allergic to rawness and loose-limbed swagger, At War With Satan is 20 minutes of adventurous, obnoxious brilliance.

The rest of the album is pretty fucking great too – from the pounding metal fury of Rip Ride and Genocide through to the preposterous Motor-thrash of Women Leather And Hell and the booze-blind bedlam of the aptly-titled Aaaaaarrghh, Venom may have been wilfully trying the patience of metal fans with a preference for more polished, professional fare, but by Christ they made an exhilarating and joyously idiotic racket. With added Satan.