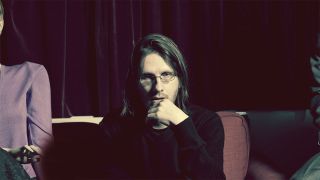 Steven Wilson’s been doing some changing. Two years ago he moved out of London and back to the town he grew up in, Hemel Hempstead. As an artist, it’s right that his new environment has affected him, and his work. His first solo album proper, 2009’s acclaimed Insurgentes, had its roots in his beloved post-punk scene, and its harder edges were forged by its urban setting. But when he was writing the follow-up, Grace For Drowning, Wilson had an entirely different view from his window. “I see the places I grew up in,” he tells Prog, “and fields and rivers. This album’s got more of a golden glow about it. It’s just a feeling. I’ve definitely gone back to the music that created my musical DNA, the more progressive art rock.”

Under his own name, he is free of the artistic expectations that might come with his other projects, from Porcupine Tree to Blackfield, and this has allowed him to explore different forms. “People forget how much jazz was an important factor in the birth of the original wave of progressive rock,” he says. “It was when pop musicians started to incorporate their love of jazz and classical that progressive emerged. Suddenly you had this massive burst of creativity – the three-minute pop song was no longer relevant, the standard of musicianship shot through the roof. A band like Yes – Bill Bruford was a jazz drummer playing in the confines of a rock band. In King Crimson, Michael Giles and Ian McDonald both grew up listening to jazz and chose to form a rock’n’roll band. It’s that fusion of jazz with spirituality and improvising, combined with classical music as a form – long pieces, the symphonic structure, creating stuff that moved in sections.”

This sense of prog and fusion permeates Grace For Drowning. It’s in the doomy Sectarian – punctuated by avant-garde saxophone, the none-more-jazz Fender Rhodes electric piano and that prog staple, the Mellotron; or the menacing, post-modern Index and the 23-minute centrepiece Raider II. This one is particularly redolent of the seminal band integral to the album’s entire flavour.

Over the past three years, Wilson has been remastering King Crimson’s back catalogue, and this exposure to the band’s master tapes – and the forensic insight into their music that provides – has had a profound effect on him. “I cannot emphasise how much I’ve learned doing the Crimson records. What I thought I understood about them I really didn’t. What’s fascinating is these albums aren’t very layered. There’s something about the tone of the instruments and the interaction of the players that gives this wonderfully warm full sound that still has a lot of space around it.

When Wilson was learning his trade in the late 80s, more was more. If you wanted a guitar riff, you’d multitrack the guitar five times. “The thing with that is you lose a lot of the character of the instrument and performance,” he says now. “When Robert Fripp’s playing on those early Crimson records it’s one guitar, single-tracked, but it sounds monolithic. It’s all about the tone, his personality, his playing, and the sound of one guitar through an amplifier. I tried to bring that to this record – stripping things down, not multitracking for the sake of it.”

Big, heavy guitars are noticeably rare on his album. Wilson’s discovered that sometimes the darkest, gnarliest sounds on
a record don’t even involve that instrument. “The heaviest music is produced by things like choirs and woodwind, and how the chords are voiced. One of the heaviest things on this record is the main riff of Raider II, which begins with two baritone saxophones double-tracked, which is pure 21st Century Schizoid Man.” He fully intends to carry these lessons into all his future recordings. “It’s almost like I’ve unlearned something. I made records by layering and layering, but I’ve come to appreciate the tone of the instruments, the music gets to breathe more and you get more the character.”

As well as informing the very structure of these songs, the classical influence of the 20th century’s finest avant-garde composers is also there in the compositions. Stockhausen’s taste for dissonance informs the disturbing choral parts of the Raider Prelude and the mournful Postcard. “I loved Stockhausen as
a teenager, and the minimalist composers like Steve Reich, Philip Glass, Arvo Pärt. Think of the soundtrack to 2001: A Space Odyssey, the music of Ligeti. It’s a very kind of cosmic sound, eerie and beautiful. A band like Crimson or Van der Graaf Generator has a very dark heart, but the music can also be very beautiful. I’ve always been interested in music as texture. One of the other bands I loved as a kid was Tangerine Dream. They were almost all about producing texture and atmosphere.”As with the music, so with the images. Wilson writes with the song’s accompanying visuals firmly in mind. Lasse Hoile is his long-term artistic collaborator; he’s the man responsible for Porcupine Tree’s striking, surreal aesthetic. His work accompanies the songs on the Blu-ray version of Grace For Drowning, and he’s usually the first person to hear new Wilson compositions. “We both love European cinema,” says Wilson. “Buñuel, Tarkovsky, Kubrick, Lynch, Hitchcock. I ask Lasse what he thinks. He’s my visual foil. We often have same thing in mind, a very intuitive idea about what’ll be right. But I want people to interpret the music, I don’t want to explain it.”

The lyrics and his trademark thin voice are just a little heartbreaking on the album. No Part Of Me In You is about a relationship gone sour; Postcard’s character sings: 'The fire in my eyes has gone out.' Elvis Costello once remarked that he doesn’t write songs when he’s happy, because he’s too busy being happy. “I’m exactly the same,” laughs Wilson. “You’re exercising that part of your personality in the writing, in order that your more well-adjusted positive elements can prevail in your everyday life. One of the most beautiful things in the world when you’re sad is to listen to a song that lets you understand you’re not alone feeling that. We’re all part of the same human consciousness.”

The album features some notable players (see sidebar), and a very special guest on Deform To Form A Star. “I met Steve Hackett at High Voltage last year. I’ve never been a big Genesis fan, but I’m a huge fan of his first few solo albums – Spectral Mornings, Voyage Of The Acolyte, Please Don’t Touch, Defector. We were talking about them and he said those records came from his love of – guess who! – Crimson and Van der Graaf. I was already in the process of writing Grace For Drowning and those two bands are touchstones for me, so having him on the record made perfect sense. We hooked up for dinner, and I asked why he doesn’t play Shadow Of The Hierophant live. He said he would if I guested on it so I did, at Shepherds Bush Empire in November. That was scary!”

The Empire will host the sole UK date of his very first solo tour, this October. It’ll be 12 months since Porcupine Tree sold out the Royal Albert Hall, on the last night of their tour for The Incident, so the venue seems a little modest. “In this business brand name is everything,” he says. “I’m not naïve enough to believe that everyone who buys a Porcupine Tree album will know the names of all the members of the band. A larger minority for us do, perhaps, but 80 per cent of people buy records because they heard a song on the radio they like, or they saw it in their local HMV. But they have no idea who’s in the band. Just ask Roger Waters – he found out the hard way when he left Pink Floyd! I don’t expect to reach everyone Porcupine Tree reaches.

“This is a tentative dip in the water. It’s such a huge financial risk for me, now I have to employ a crew and a band. And I’m going out with a big multimedia show. I guess I’m overcompensating for the fact some people might think this is a side project. It’s isn’t. It’s as epic as anything I’ve done with any of my bands, and it took the longest time – 18 months. I’m very proud of the album, and the fact that I’m taking it out on the road too. In so many ways this is my biggest endeavour.”

Robert Fripp was at the first playback of Grace For Drowning, at Air Studios. Surely he of all people picked up on his band’s influence on it? “No!” Wilson relishes the irony. Everyone else I played it to picked up on the Crimson, Lizard element. The only person who didn’t was Robert Fripp! He told me that it sounded like me. I think I’ve got to the point in my career where it doesn’t matter what I do or how much I think I’m ripping something off, it’ll still ultimately sound like me. I hope that’s true.”