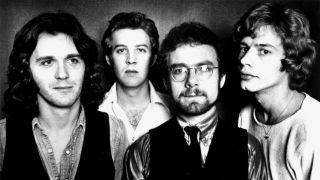 The 1970s were a turbulent time for King Crimson with numerous personnel changes from one record to the next. Before their abdication in 1974 however, the music produced in that time was bold, uncompromising and visionary, determinedly pushing at the boundaries. We chose 10 of their best from this period.

After the first band’s implosion, Robert Fripp’s determination to keep the King alive meant it’s follow-up, In The Wake Of Poseidon echoed their startling debut. Reminiscent of The Court Of The Crimson King, this mellotron-drenched anthem, with Greg Lake’s sonorous choir and Michael Giles’ thunderous drumming, is a somewhat overlooked classic.

Propelled by Ian Wallace’s jazz-inspired drumming, swirling Mellotron, Mel Collins’ furious sax and Boz Burrell’s galloping bass, Fripp’s solo, laid down on the last day of recording of their fourth album, Islands, unleashes a metallic collision of lines and chords that sounds like nothing before it in the Crimson canon.

King Crimson always had a soft spot for ballads and this is one of their best. With lyrics inspired by Rembrandt’s painting of the same name, Fripp’s resplendent solo – recorded in a single first take – is a thing of beauty, but don’t miss John Wetton’s subtle, exquisite bass detail supporting it.

The title track to Crimson’s sixth studio album is, paradoxically, a live recording. Complex and haunting, though fans believed this a meticulously composed piece, it’s entirely improvised. David Cross’ atmospheric swathes of Mellotron provides a luminous backdrop as drummer Bill Bruford and bassist Wetton shift the action from the nebulous into sharp focus.

Hugely influential, Crimson’s seventh and final ‘70s studio album was touted by Nirvana producer, Butch Vig as the kind of sound Seattle’s grunge gurus should be aiming for. Wetton’s malevolent bass is every bit the equal to Fripp’s chordal shards, while Bruford’s controlled, clattering snare and cymbal ensures head-blitzing devastation.

Recorded in the last days of their final tour of the ‘70s, even with tensions rife within the band this remarkably powerful improvisation showcases the breathtaking musical telepathy they’d developed. After Bruford’s opening roll, Fripp shouts ‘F!’, as they blast off to explore a musical universe unique to King Crimson.

Suffused with woebegone Mellotron, the melancholic ballad leads, via an ominous bass line, across the tightrope-walking one-note guitar solo to dive into a thunderous, majestic finale. An undisputed classic, never mind the best ‘70s King Crimson song, this epic contains some of the finest moments in progressive music as a whole.