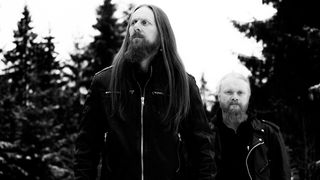 Rather than provide a retrogressive step for its co-founders, Ihsahn and Samoth, Emperor’s recent 20th anniversary tour was clearly a creative dynamo sending both artists further out into the sonic stratosphere.

Four years after their last album, Inroads, The Wretched End - featuring Samoth on guitar alongside frontman and former SCUM collaborator Cosmo, as well as Dark Funeral drummer Nils Fjellström - are back with a supercharged new opus, In These Woods, From These Mountains, due to descend on high from the Indie Recordings enclave on April 22.

In These Woods… takes the clinical yet visceral approach that marked out Samoth’s former death metal outfit, Zyklon, but reaches out further into new, equilibrium-annihilating territories. A turbulent, enthralling whorl that defies categorisation, its restless, relentless urgency skirts the avant-garde explorations that burst through the Norwegian scene in the mid-90s, alongside traces of modern-day Decapitated and Gojira, but basically braces itself for an impending apocalypse across 45 heart-in-mouth minutes, as guest appearances from Mayhem/Sunn O))) shaman Attila Csihar, Leprous vocalist/keyboardist Einar Solberg and Red Harvest’s LRZ add yet more mind-warping textures to the fray.

Before your anticipation reaches critical mass, we have an exclusive stream of the album in its full synapse-scattering glory, and as Samoth says himself: “It’s great to finally have this album ready for release. It took us some years for various reasons; different things in our every day and professional lives that took a lot of focus on our parts. We never felt any great pressure. Looking back, I think the whole process affected the album in a positive way. I personally feel I’ve almost come full circle with this new album, bringing more elements rooted in the darkness of black metal.”

Take one last glance at your compass before it goes insane, gaze up at the heavens as the coalesce into one final, all-consuming whorl, and give yourself to In These Woods, From These Mountains below!

Pre-order In These Woods, From These Mountains here!

And make the trek to The Wretched End’s Facebook page here!