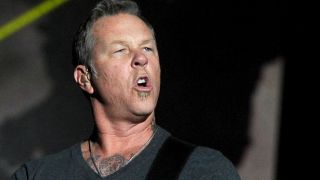 An online campaign has been launched to have Metallica removed from the Glastonbury festival bill because of frontman James Hetfield's interest in hunting.

He’s described himself as a “keen huntsman” and enjoys travelling round the world to take part in shooting expeditions – and angry anti-hunt campaigners believe that means he shouldn’t be associated with the Worthy Farm event.

A Facebook page entitled Remove Metallica has gained over 2500 likes since launching last week. Organisers say: “This page is an appeal to Glastonbury to remove Metallica from their lineup. We believe James Hetfield’s support of big-game hunting is incompatible with the spirit of Glastonbury and brings its good name into disrepute.”

The campaign has been ignited by the announcement that Hetfield will narrate a History TV series about bear hunting in Alaska. Its producers argue the documentary presents a balanced view, saying: “Brown bear co-existence with humans on the island is a delicate balance, yet is regarded as one of the most successful conservation efforts in the world. Most hunters go after adult males, or boars, who when food is scarce are known to kill and eat cubs, as well as cause trouble near populated areas.”

But some people feel the musician’s involvement in the show means his band shouldn’t perform at Glastonbury. The campaign admin says: “I doubt very much that James Hetfield is the first high-profile big-game hunter to grace the stages – I’m sure there have been many.

“I do however doubt that any of them have had a prime time History show promoting his view that hunting is a good thing to do, on at the same time. This double-exposure gives his views extra publicity and acceptability, and this is where we can have an effect.

“This is about raising awareness and making both Metallica and Glastonbury aware of what appears to be a large number of people’s disapproval.”

The documentary series, Hunt, is launched on June 8. Metallica are due to headline Glastonbury on June 28. Iron Maiden singer Bruce Dickinson, whose band co-headline Sonisphere with Hetfield and co in July, last week said he’d never consider following them to the Worthy Farm event, branding it “middle-class” and “bourgeois.”

Blogs Of War: Why Metallica at Glasto is a good thing