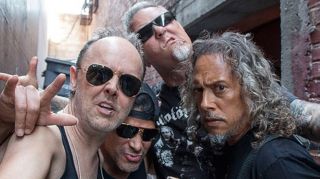 Just when we thought Metallica were going to keep us waiting forever, the day has finally come: new music has arrived! After teasing us for years with promises of thousands of riffs and endless ideas, they’ve finally dropped new hard-and-fast song Hardwired. It opens with a surprisingly ferocious drum beat and a teasing guitar part that carries echoes of Enter Sandman, before the full riff kicks in, and is allowed to build up before James’ angry vocals start just before the minute mark.

It’s mostly about the speed and the riffs here, the band getting their lyrical message across in a few choice words. The line, ‘We’re so fucked, shit out of luck, hard-wired to self-destruct’ could apply to any situation, but is hopelessly prophetic in these days of social and political turmoil, with Trump and the war in Syria looming large. James spits these words with resigned venom, his distinctive voice taking on that bleak edge. And then there’s the video, black and white, filmed close up, the strobe lighting enhancing the sense of momentum and claustrophobia – even Kirk’s solo is a brief flurry of urgent notes. It’s all the excitement of being down the front, with an undercurrent of sinister disorientation.

As a three-minute shot of adrenaline, it’s a far cry from the long-winded Lords Of Summer – First Pass Version, which they debuted in 2014, and much shorter than anything on Death Magnetic – though it clearly shares the same 80s-meets-00s DNA. With the band announcing that upcoming record Hardwired… To Self-Destruct will be more diverse than anything they’ve made yet, and that it’s a double album clocking in at 80 minutes long, it’s still unclear what direction those remaining 77 minutes will take. But if Hardwired’s fierce thrash attack is anything to go on, it’s going to be worth that eight-year wait.

The 1000 days that changed Metallica

How Metallica’s Kill 'Em All changed the world