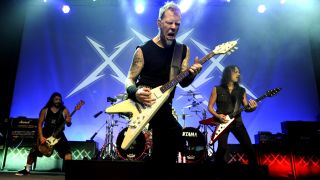 Metallica have just released a 'First Pass Version' of Lords of Summer, their first original Metallica song in six years. Paul Brannigan argues that it shows we shouldn't write off the metal titans just yet.

In 2014 no band in our world attracts more column inches, more debate or more vitriol than Metallica. Almost a quarter of a century after The Black Album installed the Californian quartet as the biggest metal band in the world, they remain, unquestionably, the genre’s biggest name: Sabbath and Maiden might have more critical kudos, but in terms of pure ‘box office’ Metallica still rule the roost, this despite two decades of artistic and creative decisions ranging from the baffling to the downright perverse.

In truth, for the past decade, Metallica have operated as two distinct bands. One of these is the flint-eyed corporate behemoth that rolls into Europe every summer, knocks out a greatest hits set in front of audiences 50,000 – 80,000 strong, trousering fees in excess of one million pounds per night: the Metallica that co-manager Cliff Burnstein described to the Wall Street Journal as “a US export the same way Coca Cola is.” This is ‘Showbiz Metallica’, a cosy, unchallenging ‘give ‘em what they want’ cabaret act, a heavy metal band for Top Gear viewers.

The other Metallica is the Metallica that really gets people’s heckles up: the Metallica that takes risks, the restless, adventurous artists who alienate, frustrate and irritate the same ‘Family’ that ‘Showbiz Metallica’ so slavishly pander to. For the sake of argument, let’s call this Metallica ‘Suicidal Metallica’.

‘Suicidal Metallica’ is the group that co-authored the last bunch of songs to bear the band’s name, 2011’s much-maligned Lulu collection. One would have to be a complete idiot to think that when James Hetfield and Lars Ulrich held the final masters of their spontaneous, instinctive collaboration with Lou Reed in their hands that the two men who’d steered this juggernaut from LA garages to the world’s biggest stadia wouldn’t have been utterly aware that this was a recording which would outrage their core fan-base. Equally, when the pair sat down to watch a first cut of Some Kind of Monster they would have known instinctively, and intuitively, that here was a ticking time-bomb which would blow up in their faces, horrifying long-term fans. And yet, with the same confrontational spirit they brought to their very earliest creative collaborations, they chose to release these curios regardless.

If this seems insane to most rational people, then they’ve clearly not been paying attention to how Metallica operate. Those principles were set in stone from day one. We’ll direct you back to the closing track on Metallica’s first four song demo, recorded in April 1982, and known to fans as the ‘Power Metal’ demo. Here, on Motorbreath, the 18-year-old James Hetfield sings:

‘Those people who tell you not to take chances

They are all missing on what life is about

You only live once so take hold of the chance

Don’t end up like others the same song and dance’

The often-obscured truth is that – as unpalatable as it may be - this ‘Suicidal Metallica’ is the real Metallica: the Metallica that played NWOBHM covers in LA clubs when literally a handful of metalheads in their hometown had ever ever heard of Diamond Head or Sweet Savage, the Metallica that put Fade To Black on Ride The Lighting to the despair of the Bay Area ‘Trues’, the ‘Fuck it all and fucking no regrets’ Metallica of Master Of Puppets.

But Lords Of Summer, significantly, marks the first occasion in over a decade where ‘Showbiz Metallica’ and ‘Sucidal Metallica’ are unified as one. The sole new track being played in the band’s achingly predictable ‘By Request’ set-list, it’s far from the best song the quartet have ever released, but it’s a ‘classic’ sound untainted by the desperation which made Death Magnetic such a calculated, contrived attempt to re-connect Metallica: The Brand with core consumers: from four minutes in, in particular, it has a natural vibrancy, groove and aggression which harks back to the finest songs conceived in an El Cerrito garage by the Hetfield/Hammett/Burton/Ulrich line-up. And that Metallica are prepared to put it out into the world before polishing off all the rough edges is a reminder that there’s a more relaxed, fearless feeling in the camp that wasn’t there in their more uptight past.

So long the whipping boys for a disenchanted community who seem to take their every mis-step personally, Lords Of Summer suggests that you write off the biggest band in metal at your peril.