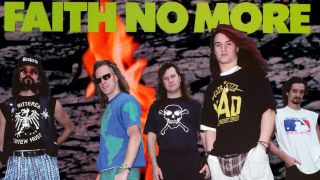 On May 24 1988, Faith No More played their last live show with Chuck Mosley as frontman, at London’s Town & Country Club. A punch-up in a hotel lobby several days prior brought long-brewing tensions to a head, and while relationships were mended (barely) enough to see out the end of the band’s European tour, it became apparent that the four-year partnership between Chuck and the rest of the band wouldn’t last.

Singer-less but not rudderless, the remaining members of the band – drummer Mike Bordin, guitarist Jim Martin, bassist Billy Gould and keyboardist Roddy Bottum – began work on their third record, a release that would change the musical landscape. Returning home to San Francisco, a furious summer of writing and demoing followed, yielding much of the material that would make up The Real Thing.

The entire record had essentially been written before a replacement singer had even been considered, and while a steady number of people applied for the position, there were few the band contacted to try out. In one of music history’s great ‘what if’ scenarios, one of those people was Soundgarden vocalist Chris Cornell.

“Faith No More asked for Chris Cornell because here was a band that was poised to be great – they just needed an exceptional singer,” explains Matt Wallace, The Real Thing’s producer and longtime FNM collaborator.

More a ‘how’s about it?’ than a genuine request, FNM instead looked to another distinctive vocal talent. Living almost five hours up the Californian coast in the town of Eureka, Mike Patton was already earning some notoriety as the vocalist of the experimental act Mr. Bungle, a band as likely to launch into proto-death metal howling as they were to blast out an R&B crooner.

That band’s bootlegs had impressed FNM founders Billy Gould and Mike Bordin enough to invite him down to rehearse, and soon Faith No More had landed themselves a new vocalist.

“Mike Patton was the only guy around who understood the music we were writing,” admits Billy. “We just focused on what made the music better – Mike did that more than anybody else.”

“The Real Thing was us having one last shot at things,” Mike Bordin reveals. “England was the closest any audience had come to understanding us, but even then with the new singer nobody knew what we were going to sound like.

As for ‘Why Mike Patton?’ Well, at the time you’d have, like, the pop, Bryan Adams guy, the androgynous glam rock guy, the evil, satanic Sunset Strip metal guy – but we didn’t want any of those fuckers, because we weren’t any of those fuckers. Mike [Patton] didn’t fit in anywhere, either – he could be any of those guys and none of them at the same time.”

FNM couldn’t afford to give Mike Patton time to acclimatise to his new environs; the album had already been written and they were itching to get into the studio while the iron was hot. Luckily, it turned out they had landed themselves an artist whose work ethic could put most industrial assembly lines to shame.

“He was very focused – he wrote all the melodies and lyrics in a two-week span,” Matt recalls. “It was exceptional – Chuck needed to be pushed uphill sometimes and be cajoled into the recording process, but Mike Patton was ready to work.”

If such time constraints stifled Patton’s creativity, it doesn’t show – he channelled everything from his inner Tom Araya on Surprise! You’re Dead! to sleazy lounge singer on Edge Of The World. “Having Edge Of The World and Surprise! You’re Dead! on the same record are the bookends of what Faith No More do,” says Matt. “I’d liken them to a five-pointed spiderweb pointing in equal and opposite directions; that’s what made them unique.’”

Gelling as a unit in the studio, the band’s next test would be to introduce their new vocalist to their fanbase. The opportunity came on November 4, 1988, at a hometown show at the i-Beam. As with most singer changes, it was met with resistance.

“After Mike did his first show with us, he got this letter and he was like, ‘Holy shit, my first fanmail’,” Mike Bordin remembers. “He opened it up and this guy was like, ‘You’re a macho creep and an asshole. Fuck you, pig – we want Chuck back.’”

Possessing the kind of tour schedule that would give most 80s hardcore bands a nervous breakdown, FNM set out to prove the doubters wrong. By the time The Real Thing’s June 20 release date rolled around, the stars had begun to align.

A&R reps and industry bodies descended on Hollywood’s Roxy Theatre the night before to see the band put on an incendiary performance that signalled the birth of a new era. Closing on a howling rendition of War Pigs, accompanied by Slash and Duff McKagan, the band were no longer rank outsiders – their infiltration of the mainstream had begun.

“By the time the band came back to Hollywood from being on tour they were amazing,” recalls Matt. “They were returning conquerors – they weren’t the band I knew as kids. The change in Faith No More from The Real Thing onwards is so much more than just getting another singer – it was a transformation of the whole band.”

Like most metamorphoses, FNM’s success wouldn’t come overnight, but the band were determined to play as often as possible to get the word out. Their success was mixed – tours with enormous acts such as Metallica and Robert Plant exposed them to whole new avenues of fame, but they still had to play almost every night to keep their profile up.

It had its upsides, though – it also meant they could reconnect with old friends, as they did when on a two-leg tour with Soundgarden and Voivod in January and March 1990, and it also allowed the band to witness history in the making when they played at The Loft in Berlin on November 9, 1989, the same night the Berlin Wall fell.

“The funniest thing in being part of monumental events, is that when they all stack up they start to feel almost normal to you,” admits Billy. “We got used to it pretty quickly – but that first year was particularly tough. Some of us didn’t have homes to come back to, and a lot of us were living off our per diems [a daily allowance given to the band by the label].”

Everything changed for Faith No More with the release of the album’s second single, Epic – a fitting name for a song that would launch Faith No More’s career into the stratosphere.

“The label had spent their wad emotionally and financially on supporting From Out of Nowhere and it did nothing – literally nothing,” admits Bordin. “They came to us in London and met us at the Columbia hotel and they basically said, ‘Rather than have us pick the next single, we want you to tell us what single to put out.’ We unanimously wanted Epic, because we loved the song at that point and how it worked for us onstage. It had many different elements to it that weren’t traditional in approach.”

But out on tour, the band didn’t have a chance to savour their success. “We were playing on the road, working our asses off and fucking with each other, so we completely missed it when it blew up!” laughs Bordin.

“Somebody would be like, ‘It’s charting here’ or ‘It’s getting radio play there’, but we were just looking to make sure the tour made it all the way to L’Amour in Brooklyn, right? We had no way of knowing it was blowing up as far afield as Australia. Epic allowed us to keep working and upped the narrative so far as crowds and people being aware of the band goes.”

FNM were now media darlings, the vanguard for an oncoming crashing tide of alternative music that would dominate the next decade. A couple of award ceremonies and an appearance on Saturday Night Live brought 1990 to a close, and the following month they were back in front of a massive live audience, at the illustrious Rock In Rio II. They played alongside titans such as Guns N’ Roses, Megadeth, Judas Priest and, er, New Kids On The Block.

“Things were changing; it was still the Whitesnake and Poison world, the new breed hadn’t come around just yet,” Bordin says. “We were insinuating ourselves into the mainstream, taking up the charge from bands like Metallica. You needed bands like Metallica and Guns N’ Roses to make it huge but keep in that punk rock energy – it’s the difference between [Ted Nugent songs] Stranglehold and Wang Dang Sweet Poontang. There was less and less nutrition and more acts just surviving, so there had to be some kind of change in there, opening up new fields where something could grow.”

The Real Thing had done more for Faith No More than they could have imagined, ambitious vision or not. Having played harder and experienced more in the frantic three years since recruiting Mike Patton, the band had managed to completely infiltrate the mainstream and push themselves as an entirely new movement, standing alongside bands like Jane’s Addiction, Living Colour and Soundgarden to present a vision for alternative metal, proof positive that a band can do anything and still change the world.

“The Real Thing definitely impacted on future bands,” agrees Matt. “Over the years I’ve had a bunch call me up to work with them simply because of that record; System of a Down, Korn, Hoobastank… a bunch tha were obviously impacted by that music and what Patton was doing vocally It truly changed the changed the face of music.”

FNM’s biggest hit was also an albatross around their neck when they got labelled with the ‘rap metal’ tag. Accusations of inspiring Limp Bizkit aside, Epic sees the band firing on all cylinders, mixing ultra-heavy funk, spat verses and an anthemic chorus that feels somewhat incongruous with the band’s experiences; they wanted it all and had it.

THE CLASSIC: Falling To Pieces

Billy Gould’s said it sucks, but the third single from The Real Thing is as close to candid as FNM got in the early days. The lines ‘back and forth I sway with the wind’ and ‘indecision clouds my vision’ seemingly crystallise Patton’s experiences of joining FNM while still tied to Mr. Bungle. Plus, that bassline slaps

Less alt, more metal – this is as riff-heavy as FNM come. This absolute beast originally stemmed from jam sessions held between FNM guitarist Jim Martin and fellow SF-inhabitant Cliff Burton (who also allowed the band to lift part of For Whom The Bell Tolls’ riff for Woodpecker From Mars), the band channelling their most thrash-tastic inclinations.

Faith No More: The Real Thing