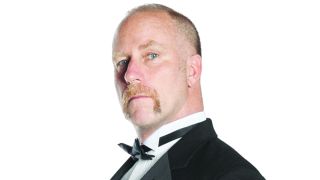 Have you been arrested?

“Yes. I was with Faith No More, and Chuck [Mosley, first FNM singer], a roadie and I were smoking pot in our old 66 Dodge on a busy street. It was stupid, we were opening up for Red Hot Chili Peppers and had played in a frat house – some anus, horrible show. Can you imagine playing in a frat house with the Red Hot Chili Peppers? Revolting scenario. So we took refuge in the van, and the police surrounded it in full-on SWAT gear. I’d shaved my head – I had a mohawk – and I was wearing a white jumpsuit, and I got taken to jail in that outfit. Everyone in the band passed around a hat at the frat house and collected money to get us out.”

That’s pretty badass. Do you have any tattoos?

“No, no tattoos – no one in Faith No More has any tattoos. I had an eyebrow piercing when I was a kid, but I it’s all closed up now. I think at the time it was very subversive, and then it became rather commonplace.”

What’s the worst injury you’ve had?

“I had a squash injury a while ago that set me back. I twisted funny on the court and threw my back out, and eventually had to have an operation. They removed some cartilage from my back. I was in hospital overnight, but then I was in pain and on pills for a month or so. Now I’m doing great. I got back on, I did the AIDS/LifeCycle ride [in 2012], which is a 500-mile ride from San Francisco to Los Angeles. So I figured there’s nothing I can’t do at this point.”

“I don’t do heroin any more. That’s a sort of dreary kind of drug. I do like the downers, though. I’m not much of an up guy. Crack cocaine never did much for me, cocaine in general not so much. Ecstasy I only did once with the band, in Atlanta, in our 66 Dodge, and that was an awful lot of fun. I haven’t tried Molly… the day is young.”

So what happened with the ecstasy?

“We were always fretting about the one set of keys we had for the van. Why we didn’t make any more keys, I don’t know… it was ridiculous. All five of us were in the van, all sitting on the back seat in a long row, close together. All of a sudden the ecstasy came on like gangbusters, it was like a wall, like BOOM! Like, fuck. And I said, ‘Where are the keys?!’ It was like a wildfire, like (gasps), ‘Where are the keys?! Where’s the keys?! Who’s got the keys?!’It was total panic and mayhem. Then I realised, I had them in my hand. I went, ‘I’ve got the keys!’ and it was like, ‘He’s got the keys! He’s got the keys!’ It was this total spiritual crisis and solving. That, to me, is ecstasy in a nutshell. It was like a love-fest after we found the keys!”

What’s been your most extravagant purchase so far?

“In San Francisco in the early days, there used to be naked club things that were sort of weird, that gay people would do. That seemed odd. It’s a weird, vulnerable place to be. I mean it’s not that weird, because everyone else is naked, but to be in a room with a bunch of naked people is weird. I liked it, it was really fun, but looking back, it was a weird experience.”

What’s the oddest gift you’ve had from a fan?

“There was a witch named Rhianna, in Washington D.C., that used to gift me a lot of things. She had a couple of ferrets and was a full-on black witch. She used to send me different strange stuffed animals, like dragons, very Dungeons & Dragons sort of fantasy, stuffed animal things. It got a little crazy. She also gave me all of the stuffed Teenage Mutant Ninja Turtles, but I ended up giving them to a friend’s child. They were lovely, but I passed them on.”

Do you have any phobias?

“Styrofoam. I’m really horrified by it. I can’t get near Styrofoam; I can barely say the word [he visibly recoils]. I don’t like the way that it rubs against itself, I don’t like the sound that it makes, it gives me a horrible feeling. I can’t be near it.”

What do you want written on your tombstone?

“I think I’d like to keep it simple. My name and the dates would be great. Maybe a symbol, but I haven’t decided. I’m really into Sasquatch [Roddy has written Sasquatch: The Opera based on the beast], so maybe an icon of Sasquatch would be a nice place to start. It’s a big part of my life.”

The Story Behind The Song: We Care A Lot by Faith No More