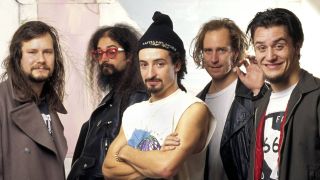 Faith No More bassist Billy Gould has recalled the “strange conversation” they had with guitarist Jim Martin over his return.

He originally left in 1993 ahead of the band’s split five years later, but he was consulted ahead of the 2009 reunion that’s led to comeback album Sol Invictus, out next week.

Gould tells Rolling Stone: “He said he would do it. He said it was not an emotional thing. ‘But there are some songs we wrote after you,’ and he’s like, ‘That’s not a problem.’”

The bassist adds that misgivings arose when Martin was the first to mention having contracts exchanged. “On the surface it was great – but it didn’t really feel right.”

In the end the rest of FNM decided that the situation was already too fragile. “We left on a bad note,” Gould says of their split.

“It had been 20 years. We had some catching up to do with ourselves. Did we really want to bring this other energy in? It’s like, no – it just didn’t feel right.”

Sol Invictus is released on May 18. FNM return to the UK next month: