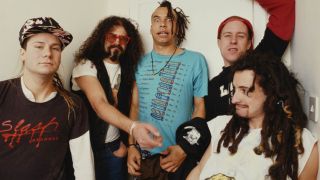 Faith No More bassist Billy Gould reckons the band “got lucky” with their 1985 debut album We Care A Lot.

It hasn’t been commercially available since 1996 but will be reissued on August 19 via Koolarrow Records, and features a remaster of the original album along with alternative mixes, demos and live cuts.

And looking back 31 years since the record’s launch, Gould suggests they were fortunate to catch a break with the album, which featured frontman Chuck Mosley.

He tells the Independent: “We did a lot of things that didn’t make sense to people outside of the band but I think that’s ever been a problem. As long as it made sense to us, we always kind of found our way through it. We were playing this weird music and we just got lucky!

“We were recording demo tapes but they were falling flat, so my theory was if we recorded in a 24-track studio, it would sound better and people would take us more seriously.

“It’s a stupid way to look at it, but that was my 21-year old brain trying to figure out why we weren’t connecting with people. That said, we tried it and that’s what ended up being the first side of this record. We then we got signed a week afterwards – it happened that quickly.”

He previously said he stumbled across the original album master tapes while cleaning out his basement. And before he played them again, Gould says he was adamant that they wouldn’t sound up to scratch.

He continues: “I always felt like the record sounded pretty 80s – it just had a very dated sound. But I threw a couple hundred bucks down to bake the tapes, just to see what they’d sound like now, more out of curiosity than anything.

“I’m listening on the monitors as the reels are getting played and it sounded fucking great! It brought me right back to when we were mixing it.

“So I told the other guys and they said, ‘Hell yeah, let’s put it out!’ A lot of people don’t know this side of the band so it’s a cool thing to be able to put out again.”