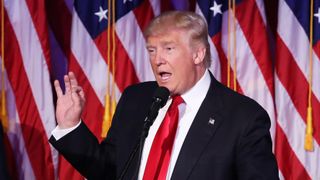 After two years and 20 candidates, the United States of America has elected Donald Trump as their 45th President earlier today.

After what has been a knock-down, drag-out Presidential campaign, the Republican nominee earned 276 electoral votes securing his victory over Democrat nominee Hillary Clinton, who earned 218 votes.

Here’s how the rock world reacted…

On Election Day, many musicians took to their Twitter and Instagram accounts to encourage their fans to vote. Some even wore sunglasses in bed. With no shirt on.

Some made it very clear who they were voting for. Jared Leto even made a fancy image and stylishly sidestepped Twitter’s 140 character rule. He also tweeted about himself in the third person.

Some played their cards close to their chest, but simply wanted people to exercise their democratic right to vote rather than sit on their arses.

We think that Trump wasn’t getting Off! frontman Keith Morris’ vote. Just a tiny, tiny hunch.

Enter Shikari frontman Rou Reynolds was keen to follow how the election was unfolding overseas, but headed to bed for some much-needed sleep.

A few hours later, he checked his phone.

While the votes were being counted across the country, it became apparent that there was going to be a clear winner. Many were quick to voice their disgust. Some were simply baffled.

Sixx AM guitarist DJ Ashba tweeted his congratulations to Donald Trump, then later claimed he didn’t even vote at all. Is that the sound of someone backpedalling furiously?

It’s not like Kid Rock to sit on the fence.

The Rolling Stones frontman was on hand to deliver the most sarcastic tweet of the day.

Despite all the doom and gloom, Anthrax guitarist Scott Ian reckons everything is going to be just fine.