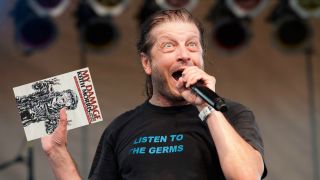 My Damage: The Story of a Punk Rock Survivor is the first memoir written by OFF! frontman Keith Morris. As a founding member of Black Flag and Circle Jerks, the book is an unflinching account of his life in the punk rock trenches. Here’s what we learned among its brilliant 336 pages…

Keith’s dad was kicked out of Inglewood High School for kidnapping the principal.“He was a straight-up drinking, drugging, hard-living, motorcycle-riding, leather jacket-wearing, take-no-shit-off-of-anybody kind of guy. He was basically a thug.”

2. BLACK SABBATH SOUND MORE INTENSE WHEN YOU’RE OFF YOUR FACE ON CHEAP WINE

Morris – along with his best friends Ted and Dave– first got drunk on Blue Nun. He was 14. “We drank the wine and listened to Black Sabbath on an eight-track player. I’d always liked Black Sabbath, but this time they were heavier and more intense.” He later vomited “five or six times” and missed the toilet every time.

3. IN HIS YOUTH, HE TOOK DRUGS MEANT FOR SICK ANIMALS

He had a friend who worked at a zoo. You think he’d blag free entry and all sorts. Not quite. “He would steal elephant tranquilliser, rhino tranquilliser, hippo tranquilliser – you name it,” writes the vocalist. “A couple of lines of that stuff and we were flying out of our minds.”

4. HE GAVE THE GUN CLUB THEIR NAME

He came up with the name during a conversation with Jeffrey Lee Pierce. In return for his band’s new monicker, Pierce gave the Circle Jerks the song Group Sex which went on to become the title track of their 1980 album.

During his time in Black Flag, Morris and guitarist Greg Ginn would frequent a drive-thru dairy. One of the young employees was Jim Lindberg, who would go on to front Pennywise.

6. THE HENRY ROLLINS VERSION OF BLACK FLAG MADE HIM JUMP AROUND LIKE A MONKEY

After quitting Black Flag, Morris initially wasn’t a fan of one of his successors, Henry Rollins. After seeing a performance at the Olympic Auditorium, he left before they finished their set. His opinion changed when he saw another show at the Cathay de Grande in Hollywood: “If you harnessed that energy, you could have blown up all of Hollywood and levelled the entire town. That’s how great they were – I was yelling and screaming and jumping around like a monkey with an M80 shoved up its ass.”

7. HIS CHIROPRACTOR USED TO BE IN A BAND

That’ll be the late John Ciambotti, who played bass on Elvis Costello’s 1977 album, My Aim Is True.

8. HE THINKS FREE SOFT DRINKS LED TO HIS DIABETES

Keith partially blames developing diabetes on drinking around eight large glasses of pop per shift while working at Millie’s Diner in Silverlake. “I was bingeing on it like a horse with a bendy straw.”

9. HE TAKES HIS TIME CATCHING UP WITH THE LATEST FILMS

Despite Circles Jerks contributing two songs to the 1984 Repo Man soundtrack – Coup D’Etat and When The Shit Hits The Fan, it was only until a few years ago that Morris saw the film in full. “I didn’t own a TV or have a copy of the movie,” he writes. “My mom couldn’t believe it.”

After Repo Man, Circle Jerks were invited to work with director Alex Cox, this time on his punk biopic Sid & Nancy. After recording some sound effects for a scene involving a box of kittens, Morris was invited to play the role of Sid Vicious’ drug dealer. “Which was hilarious for a billion different reasons,” remembers Morris. “Unfortunately, the logistics didn’t work in my favour. They were shooting in the middle of a Circle Jerks tour. The weather at that particular time of year was bad and they didn’t want to risk me getting snowed in or having my flight delayed. Mother Nature took away my big Hollywood break.”

11. HE WAS A CELEBRITY BARTENDER

The opening night at Smalls bar in Los Angeles proved to be so busy, that Morris ended up working behind the bar as “celebrity barback”. “I made up drinks on the spot – Sex On The Harpoon, Rusty Greyhound.” He once served Joe Strummer, who told him: “I think your body of work with Black Flag and the Circle Jerks is great!” That’s far cooler than a $5 tip.

12. HE ONCE WORKED FOR RICHARD BRANSON

When the Virgin mogul started the V2 record label, Morris became an assistant to his friend John Sidel, who signed the White Stripes and Burning Brides – featuring Dimitri Coats, who would play guitar alongside Keith in OFF!. “I was basically A&R scout boy,” writes Morris. “We were constantly listening to music to find the next group who could tickle our testicles.”

13. HOW A CIRCLE JERKS PROJECT ACCIDENTALLY BECAME OFF!

Burning Brides guitarist Dimitri Coats approached the Circle Jerks with a view to producing their next album. After working on songs with Morris, the pair realised the music “had gone to a place beyond the Circle Jerks.” Morris remembers: “I didn’t want sing-along. I wanted something that made a statement: fuck you, here we are, now get out of our way. That’s when OFF! was born.”

OFF! filmed two videos with Jack Black in 2012 – Wrong and Over Our Heads. “Off camera, you’re not going to find a sweeter, nicer more generous guy than Jack Black. We had dinner at Fatburger and didn’t talk about the shoot or the band or Hollywood bullshit. We talked about his kids, ate our burgers like a couple of regular dudes and enjoyed the fine cuisine.”

My Damage: The Story of a Punk Rock Survivor is out now in North America. It will be published in the UK on October 20 through Da Capo Press.