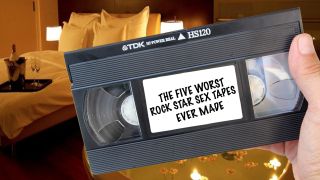 Once upon a time rock stars jealously protected both their privates and their privacy. But then along came Tommy Lee’s devil-may-care penis and everything changed.

The Mötley Crüe drummer and his then-wife Pamela Anderson kick-started the whole celeb sex tape business, but this video has some – dare we say it? – charm because it doesn’t look cold-eyed and staged for profit and profile. Filmed in 1995 and stolen from the couple’s house by a disgruntled worker, the tape appeared in 1998 and features such comedy gold as Lee steering a speedboat with his ginormous todger, and his unforgettable line when they’re setting up tent that “we’re so fucking camping it’s ridiculous”! These two make life and sex look like fun, which is no small achievement in celebrity sex tape world.

Simmons with his stage clothes on is a sight to behold. But the Kiss bassist’s 2008 “romp” with an Austrian energy drink spokesmodel (and what the hell’s a spokesmodel?!) called Elsa was a whole new bowl of wrong. He turned in a “performance” that was even lamer than Kiss in their non-makeup period. He keeps his shirt on mid-boff, for heaven’s sake. We are definitely not calling Doctor Love!

Of course everyone knows that Pammy and Tommy is the original and the best rock star sex tape to see the light of day. So this in-out, in-out effort – filmed before P&T but not seen till 1998 – is often overlooked. When you watch, it’s not hard to see why the conscious coupling of the Poison frontman and the Baywatch Babe failed to raise temperatures. How two undeniably buff bodies can make sex look so, well, boring is hard to fathom. The tape, which Michaels says he tried really, really hard to stop being seen, is a bit grainy and a lot tedious, though in time-honoured fashion Brett keeps his headgear on at all times, even when he’s in full flesh-shaking action. What is it? Stapled to his bonce?!

Two years after filming himself on the job with a girlfriend, the year 2005 saw Limp Bizkit frontman Fred Durst suing 10 websites for posting that same tape. Given what happened to his band, Durst should have been grateful for the publicity, if not for the “big” reveal of a penis that well-known website Gawker – with magnificent use of understatement – labelled “unimpressive”. Durst apparently felt no shame. Imagine if you were the girl, though…

1998 was clearly a big year for filmed sexual intercourse – and Mötley Crüe frontman Vince Neil was determined not to miss out on gifting his tackle to the world. To help him in his noble quest, Neil enlisted the help of experienced adult performer Janine Lindemulder, who thoughtfully brought along her friend Brandy Ledford, just in case she got lonely. As it happens, she needn’t have worried. Neil and his genitalia are busy as bees – even if the whole thing looks totally staged.

A 1999 hopping-on session in a tour bus between Rock, former Creed frontman Stapp and four willing ladies caused something of a furore when it finally appeared online in 2006. Stapp claimed the tape had been stolen from a safe in his house – and the fact that his second solo album was imminent had nothing to do with it. Kid Rock, meanwhile, blamed Stapp for “losing” the tape, calling him an idiot, while also claiming that if any money were to be made from this particular shagfest, then it should be his, because “it’s my performance.” Way to go Kid!