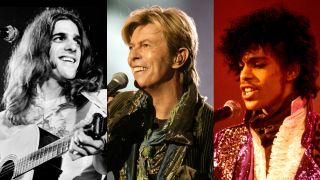 It’s no exaggeration to say that the Grim Reaper has been working overtime in the last 12 months. The death of Lemmy last December ensured that 2015 ended on a bum note, but if anyone thought things could only get better in 2016, they were sadly mistaken.

The year had barely even started when it was announced that David Bowie had passed away from liver cancer in his adopted home of New York. The subsequent outpouring of grief stemmed as much from the shock of his death as from anything else. Like so many rock stars before him, Bowie appeared to be immortal. Sadly, that wasn’t the case.

Inevitably, some of the rock stars we lost in 2016 were in the twilight of their years. Sir George Martin, who helped pioneer the sound of modern music via his work with The Beatles, was 90 when he died in March. Singer-songwriter Leonard Cohen was 82 and Suicide singer/original punk provocateur Alan Vega was 78.

But others were taken way too young. Former Megadeth drummer Nick Menza was 51 when he died in May. Tom Searle, guitarist with British metalcore heroes Architects, was even younger – just 28 when he lost his battle with cancer.

There were others too: Y&T’s Leonard Haze, ex-Wings man Henry McCullough, Leon Russell, Fairport Convention’s Dave Swarbrick… the list, sadly, goes on. To those, and everyone else we lost in 2016, we salute you.