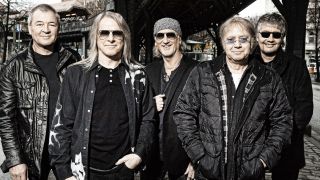 Deep Purple have announced a run of UK dates under the title of The Long Goodbye Tour.

They’ll play five shows in November 2017 with support from Europe, following the release of upcoming album inFinite earlier in the year.

The tour title increases speculation that Deep Purple are planning to end their career, which began in 1968 and includes a catalogue of 20 albums, including inFinite.

That speculation was fuelled by drummer Ian Paice suffering a minor stroke last year, forcing him to miss the only Purple shows he’s ever missed.

Bassist Roger Glover recently said of the follow-up to 2013’s Now What?!: “I know you’ve been very patient – and so have we. We tour a lot and it’s difficult to actually get some time in the studio sometimes. But the album is finished. It won’t be much longer.”

The first single from the new record will arrive on January 20. Tour tickets go on sale at 9am on December 9 via AEGlive.

Classic Deep Purple track Smoke On The Water was last month confirmed for induction into the Grammy Hall Of Fame next year.