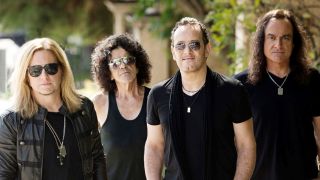 Dio, Rainbow and Last In Line bassist Jimmy Bain has died at the age of 68, it’s been reported by close friends.

He was gearing up for the launch of Last In Line’s debut album later this month, and the band were taking part in Def Leppard’s cruising festival in the Caribbean.

No official statement has yet been made.

Bain played on Rainbow’s second album, Rising, in 1976, before being fired a year later. He went on to guest with Thin Lizzy and worked in frontman Phil Lynott’s solo band, before forming Wild Horses with ex-Lizzy guitarist Brian Robertson.

He appeared on Gary Moore’s 1983 album Dirty Fingers before signing up for Dio and playing on seven albums with vocalist Ronnie James Dio, from 1983 debut Holy Diver to 2002’s Killing The Dragon.

The original Dio lineup – including Def Leppard’s Viv Campbell, Vinny Appice and Claude Schnell – reformed in 2012 under the name Last In Line. Their debut record Heavy Crown, featuring singer Andrew Freeman but without keyboardist Schnell, is to be released on February 20.

Motorhead’s Phil Campbell has paid tribute, saying: “Jimmy Bain was a true musician and songwriter. He was involved and wrote more than you probably imagine.”

Among other early tributes to Bain were those from Thin Lizzy, Neil Murray and Simon Wright.