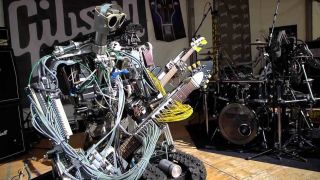 There’s nothing in the Bluffer’s Guide To Forming A Rock Band that says new groups have to be made up of sullen groups of men in leather jackets. There are other, less explored paths to both eternal success and everlasting ignominy. Take Autopsy Report of Drowned Shrimp, for instance. This wild bunch of Japanese experimentalists wear giant shrimp masks with light-up eyes onstage, like a demented underwater Slipknot, while their leader plays bass guitar attached to a tripod … and they’re just the tip of the extreme iceberg.

An amalgamation of musicians from the Dutch and Belgian black metal scenes, what took this lot way beyond the norm was that they used genuine mental patients on their three albums, released between 2002 and 2007. Apparently, one of the band worked in a mental hospital and somehow got permission. The idea was to have genuinely dark despair in the music. Crazy!

No simulated sex here. Rockbitch went all out onstage in their commitment to making the whole experience as real as it could be. They also added in the occasional pagan ritual, just to spice things up even further. And, as if that wasn’t enough, the band would hand out what they termed a ‘golden condom’ to one lucky male fan every night. That allowed them backstage for… adult fun!

This pioneering punk-metal band from Seattle was one of the first “extreme metal” bands in the US, and not just because of their music. Frontman Kurt Struebing was convicted of murder in 1986 when he chopped his own mother into pieces with a hatchet. When he was released, he simply got the band back together. He committed suicide in 2005. Now that’s heavy.

Formed during the height of “Satanic Panic” hysteria in mid-80’s America, Radio Werewolf was once considered “the most dangerous band in the world”, largely due to the notoriety of their vocalist, Zeena Schreck. Zeena, you see, is the daughter of Church of Satan founder Anton Levay. Heavy flirtations with Nazi imagery, necrophilia, serial killers and mysterious cult rituals only added to the madness.

The “Werewolf of Woodstock” first made a splash with late 60’s Austin proto-punks Thirteenth Floor Elevators but his career was stalled by frequent trips to the psyche ward. While Roky never quite returned to reality, he still managed to create decades of seriously far-out rock n ‘roll, usually with lyrics that reflect the hallucinogenic horrors of his paranoid schizophrenia.

Father Yod was the founder of the Source Movement, a spiritual commune/cult that flourished in Hollywood in the early 70’s. Yod used the earnings from his Source health food restaurant to buy a mansion in Hollywood Hills which he filled with hippie chicks and long-haired musicians. They plugged in, they turned on, the kale salads and drugs flowed freely.

Complete lunatics from Philadelphia who sorta played hardcore punk but really just wanted to beat themselves, and their audiences, to a bloody pulp. Which they did, every night. True and utter rock’n’roll mayhem at its most savage and dangerously reckless. How this band got away with destroying so many venues and injuring so many paying customers is a mystery.

Lots of bands claim to be from outer space, but Zolar X might have been the most convincing. Arriving in that hazy mid 70’s netherworld between glam and punk, not only did Zolar X dress like silver-suited, antenna-headed space surfers, they talked in their own alien language. They delighted and confounded Hollywood until they vanished in a puff of green smoke in 1981.

The All Sports Band

Sound engineer Tracy Coats (Frampton Comes Alive, Kiss Alive I & II) came up with the genius/crackpot idea of a hetero, sports-based Village People. The result was the All-Sports Band, which featured a boxing drummer, a football and baseball player on guitar and bass, a race car driver keyboard player, and a karate kicking singer. What could go wrong?

There were a few all girl bands with that name in the 60s. This lot were from New Jersey, and were renowned for playing topless. However, this wasn’t a novelty act. These Ladybirds could actually play, in a garage rock fashion. Eventually, they went to Las Vegas and LA, where they were managed by top golfer Raymond Floyd!

Ah, here’s one for all those who don’t think there are enough birds in death metal. Because Hatebeak are fronted by Waldo, and he’s a Congo African grey parrot. It certainly adds a new dimension to extreme metal lyricism, and despite the daft nature of the exercise, it works. They’ve released four albums to date, but sadly never tour.

A deathgrind band formed in 2003, who had two vocalists. The difference being that the pair were Basil and Budgie, two female pitbull terriers. In a way, Dan Lilker of Nuclear Assault started this trend, when he sent a joke demo to labels, with his dog on vocals. But Caninus have taken it further. Sadly, though, the band have split up after both dogs died.

An instrumental robot band, with each member having been built from recycled metal between 2007 and 2012. But what they do is actually play real instruments – which makes a change from having humans using synthesisers. Their live setlist features songs from Motorhead, AC/DC, Pantera and Ramones. Compressorhead are a four-piece, and recently started a Kickstarter campaign to raise enough money to build a vocalist. Sadly, funding fell well short.

The whole band is dead now, two from alcoholism, one from suicide. Frontman Joachim Pimento took his own life in 1999 after a long struggle with mental illness, but not before unloosing 1987’s aggressively alarming Guitars of the Oceanic Undergrowth album, an absolute belter of way-left-of-center post-punk that sounds like the work of fractured minds, because that’s exactly what it was.

Clad in black, with ropes around their necks and monastic shaved scalps, The Monks banged out primal, barbed garage rock rhythms, on a banjo strung with guitar strings, with stream-of-consciousness lyrics like “My brother died in Vietnam. James Bond, who is he? …We don’t like the atomic bomb”. Weirdest bit is, they were American GIs stationed in Germany in 1965.

Proving that 1965 was The Year Music Went Weird, London’s experimental free jazz art scene spawned the challenging, groundbreaking, and downright patience-testing concept of AMMMusic. Paul McCartney attended an improvisational performance in 1966 at the Royal College Of Art; according to beatlesbible.com, the audience “numbered fewer than 20” and Paul “made occasional sounds using a radiator and beer mug.”

An off-beat side project for comparatively sane mid-80s thrashers Wehrmacht, Spazztic Blurr burst out of Portland, Oregon with a one-off LP so wilfully perverse that to this day nobody’s quite sure what it’s called. Saturated in surreal humour, there’s a bold, virtually artful stab at varied musical styles that veer into goofball parody before being blissfully overwhelmed by super-fast grind.

Dave Brockie - Gwar’s much-missed Oderus Urungus - went off on another bizarre tangent in 1995, rebadging himself as Patrolman Cobb Knobbler in X-Cops, a band playing hardcore-infused death’n’roll dressed as police officers, singing songs like Cavity Search, Zipper Pig and the blistering Welcome To New Jersey from from the satirical perspective of a brutal vigilante law enforcement unit.

Another victory for the mindbending capabilities of Earache Records circa 1991, OLD were the earliest musical endeavour of renowned producer and musician James Plotkin, alongside otherworldly vocalist Alan Dubin and ex-Soundgarden/Nirvana bassist Jason Everman. From a foundation of zany cartoonish grindcore, the New Jersey anarchists gradually spun their fearless imaginations through abstract industrial psychedelia to electronic house and techno influences.

Dubbed “The audial essence of pure black evil” by Mayhem guitarist Euronymous, Abruptum members IT and Evil raised sonic Hell with torturous excursions into horrific atmospheric noise. Producer Peter Tagtgren once explained his Abruptum recording procedure; he left them to it, and when he returned there was “blood all over the walls and an Abruptum album in the can”. It was claimed by some that singer IT was a dwarf, but he was merely shorter than average.

Velvet Cacoon appeared on the early 00s CD-R-trading ambient black metal underground amid many outlandish claims and bizarre backstories that had many assuming the band was a hoax. Were they really eco-terrorists? Or elves? Did they really have a metal guitar wired up to diesel-powered tubes transmitting sound via fibre optics through a 15-gallon aquarium of seawater, wine and blood? (Nope.)

The name’s a giveaway; Sleepytime Gorilla Museum present their nightmarish surrealist prog metal with a distinctively demented visual style and a wide array of custom-built instrumentation, including the Tangularium, pedal action wiggler and Electric Pancreas. Their self-proclaimed mission is to destroy rock music with the power of rock music, and their first concert was performed to a single banana slug.