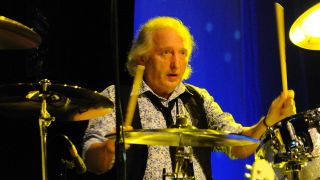 Mott The Hoople drummer Dale ‘Buffin’ Griffin has died at the age of 67.

He passed away last night, having been diagnosed with Alzheimer’s disease when he was 58.

The band’s keyboard player Verden Allen tells the Hereford Times: “I can’t believe it. Dale was like family, we were very close. We went through a lot together.

“I got a call from our manager Pete Purnell this morning. Dale was a nice, well-spoken man and a brilliant drummer, it’s unbelievable that he’s gone.

“I suppose in some ways it’s a release for him now. He had suffered for many years.”

Griffin was living in a care home near Brecon in Wales when he passed away and was being cared for by his partner Jean Smith.

He played a part in the band’s 2009 40th anniversary reunion shows, performing on the encores. His friend Martin Chambers of The Pretenders filled in on the dates.

As well as his drumming work, Griffin forged a successful career as a music producer. He produced many John Peel’s Radio 1 sessions, including recordings by the Smashing Pumpkins, Soundgarden, Killing Joke, Napalm Death, Pixies, The Damned and Nirvana.