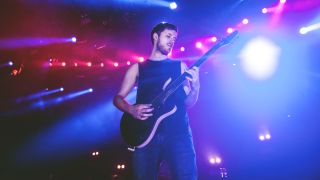 Architects founding guitarist Tom Searle has died at the age of 28, the band have confirmed.

In a statement posted on the Architects Facebook page today, they confirm Searle had been battling cancer for three years.

Tom’s twin brother and bandmate Dan Searle says: “He spent the last two months of his life fighting with everything he had to overcome the disease once and for all, and things appeared to be moving in the right direction. But in the last two weeks it suddenly took a turn for the worse and finally he left us.”

Earlier this summer, Architects were forced to cancel their European tour due to a family emergency, which Dan explains further in the Facebook statement.

He says: “We had to cancel our European festival tour and US headline tour because on June 8 in Luxembourg, Tom was extremely sick, we called an ambulance and he was taken into ICU. The following day he was placed into a medically induced coma and the doctors told us that it was unlikely that they’d ever be able to wake him.

“Five days later, against all the odds, he was awake again, and in a few short days following that, myself and Tom cancelled the air ambulance that was due to take him home and we got the Eurostar train home. Classic Tom Searle.”

While the future of Architects is unclear, Dan confirms the band will tour their latest album All Our Gods Have Abandoned Us.

He adds: “We will be going to Australia in a few weeks and we will be doing our UK and European headline tour in October and November. We hope that these shows will be an opportunity for everyone out there to show their respects to my wonderful brother.

“It won’t be easy for us to get on stage and play every night without him, but its something that we must do.”

A JustGiving page has been set up to raise money for the Martlets Hospice in Hove, where Tom was cared for in his final days.