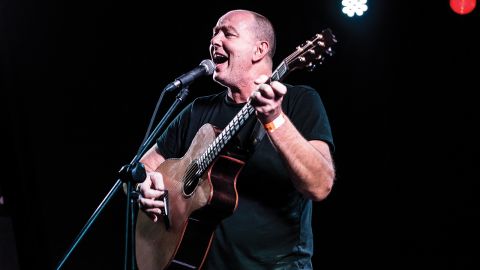 The Gift come on to a small but enthusiastic crowd of early birds with a sound reminiscent of former Banks charges, IQ. Frontman Mike Morton looks like he’s having the time of his life even when gremlins strike the band’s keyboard rig. New songs Sweeper Of Dreams and At Sea hint at mythological Genesis epics but it’s the rockier closer Too Many Hands that most impresses.

Alan Reed has been away from the limelight since a triumphant appearance with Steve Hackett at the Royal Albert Hall in 2013. But For The Greater Glory comes roaring out of the Scotsman’s mouth, rendering amplification a moot point. He narrates a cautionary tale of drunk-visiting auction sites, revealing his new acquisition, a rack of bass pedals. It was money well spent judging by their filling-out of Who’s To Blame? and Sanctuary, but it’s an a capella version of Win Or Lose dedicated to Banks that really impresses – Reed stretches his remarkable voice to breaking point in sheer emotion.

Andy Tillison and Matt Stevens reprise their well received keyboard/guitar improv act. A quick decision on C minor the only precursor to 10 minutes of spontaneously-composed post-rock. This is Tillison’s first public performance since a heart attack in 2015 and he’s having a ball – “I’ve got a looper now too,” he taunts, layering chords behind Stevens’ repeating angular Sonic Youth figures.

The Tangent colleague and “member of David Gilmour’s band” Theo Travis guests for a Floyd jam – Aftereugene – forever now to be dubbed Careful With That Sax, Theo.

A demented take on Rory Gallagher’s Bullfrog Blues allows the trio to trade incendiary solos and ends a fun-filled set.

“How can I be an angry man when I’m not particularly angry anymore?” is the question posed by Francis Dunnery in Revolution. Joy is the overriding emotion he emanates alongside vocalist Dorie Jackson (daughter of ex-Van der Graaf saxophonist David). He fixes her in his gaze like a matador, changing tempo on-the-fly, thereby making each performance unique and fluid. Between songs, Dunnery stalks the stage improvising blistering runs on his high-slung acoustic in a flamenco style.

The headliner’s hilarious anecdotes and self-deprecatory quips would get any audience on-side, but this is a partisan crowd already. A swathe of It Bites hits including Kiss Like Judas and Still Too Young To Remember give us the opportunity for a prog singalong.

All four acts provoke warmth, laughs and emotion. Geoff Banks would have loved it.