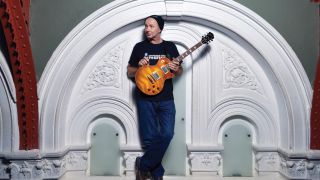 There are some great cleaning-up stories, but yours – going out on the razz with Motörhead and waking up in a black wedding dress – is tough to beat.

Yeah. I think it was an album launch of theirs, but I was so wasted from booze and blow that I can’t be certain. I awoke on Hollywood Boulevard. And it wasn’t just the wedding dress, someone had a gun at my head. That was it. I had to stop.

How long have you been sober?

It’s been twenty-three years of no drinking or smoking, no angel dust [laughs]. Just plenty of Heinz baked beans and coffee.

Did you go to rehab, or stop alone?

Did booze contribute to the break-up of the original It Bites line-up?

No. I’m just the kind of person that won’t do the same thing day in and day out. I’ve got too much to do in life.

At a solo gig in the nineties, you walked on stage at Dingwalls in London, switched on a kettle and said: “Good evening. My name’s Francis and I’m an alcoholic.”

We also had a poet with us. I thought it was more interesting than a run-of-the-mill rock show. I got booed off a few times. But that’s been my career. I really don’t mind getting booed, because I’m not frightened of what an audience thinks of me.

I won’t drink again, but drinking was never my problem anyway. The reason why I drank was the problem, and I’ve dealt with that. The alcohol is just the symptom.