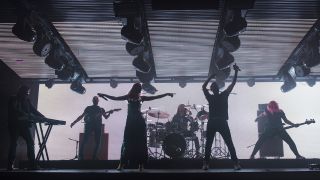 ZIO, the new prog band  from former Karnataka drummer Jimmy Pallagrosi, have release a promo video for their first ever single X-Ray, which you can watch below.

"Joe Payne is playing the role of the hero, Alan, and Hayley Griffiths his beautiful side kick, Flower Torania and together they embark on the a journey across the first world of the video game, the perilous Burbwood," Pallagrosi explains of the video, which was directed by Miles Sarkin. "Alan is against the clock to make it through this land and as he runs he must fight three headed monsters controlled by none other than Nato (played by Franck Carducci). The forthcoming album will be accompanied by a story which has been the inspiration for the album."

X-Ray will be released on all digital platforms on October 21. The same night the band will play their first ever UK gig at London's Half Moon in Putney.

“You must never take music for granted and always work hard to keep going,” Pallagrossi tells Prog. "Like the lyric from X-Ray says; "I'm not stopping now! I'm not missing out!"."