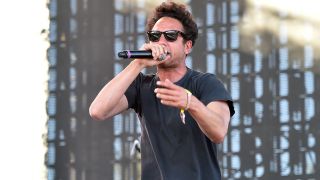 Rage Against The Machine vocalist Zack de la Rocha has returned with his debut solo single titled Digging For Windows.

It wad produced by Run The Jewels’ El-P who previously collaborated with de la Rocha on Close Your Eyes (And Count To Fuck).

Along with streaming the track, de la Rocha has made the song available to download for free via Soundcloud or from BitTorrent Now.

In May, Commerford reported that the project had received the green light from de la Rocha, saying: “I spoke to Zack and got his blessing, and that’s really great. We’re a family, and there’s support across the board. I’ve definitely been keeping him in the know.

“You’re never going to replace Zack and we aren’t trying to do that. He’s a unique artist and showman.”

And in July, D said de la Rocha was welcome to “come in and just hang” with Prophets Of Rage any time.