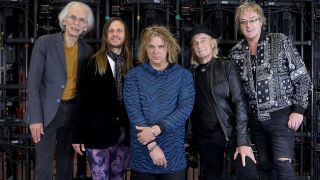 Yes have announced 24 rescheduled dates for their The Album Series 2021 tour. The band will perform two sets each night, with the first featuring a selection of classics from the band’s back catalogue, while the second set will see them play Relayer in full. This year’s shows were postponed due to the coronavirus pandemic.

The new UK and Ireland dates are also expected to be announced soon. All original tickets are valid for the new shows.