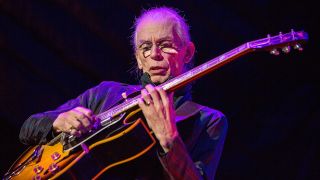 Steve Howe has spoken to this month’s Classic Rock magazine about his successful and acclaimed career.

The guitarist touches on a variety of subjects including his early work with Tomorrow, his time in Asia and, of course, being a member of prog royalty in Yes.

Much has been made in the past about Howe’s love-hate relationship with former Yes frontman Jon Anderson – and asked how they are towards each other now, Howe replies: “I’m not going to tell you a lot. But in the 70s Jon and I were a great team.

“After that, in the 80s, that role got diminished. Then we came together again for Anderson Bruford Wakeman Howe, and the Yes continuation right up to the final split in 2004. That’s an awful lot of time.

“Stimulus, agreement and like-mindedness most definitely fluctuated continually. But it was never impossible to work together. But it wasn’t as dream-like as the seventies.”

Howe adds: “Jon and I get on really well now. We have the history and the friendship. But it’s probably better that we don’t attempt to work all the time together – because of this and that. But nobody knows what the future holds.”

The full interview with Howe can be found in Classic Rock 273 which is on sale now in UK newsagents and available to buy online.

AC/DC’s Back In Black features on the cover in celebration of the classic album’s 40th anniversary, while the new issue also features Joni Mitchell, Kiss, Krokus, and the second part of the magazine’s epic oral history of goth.