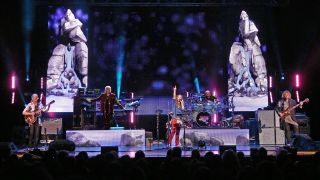 Yes have announced a UK and European tour for next year to mark their 50th anniversary.

Steve Howe, Alan White, Geoff Downes, Jon Davison and Billy Sherwood will play a selection of tracks from throughout the band’s career – including performances of sides 1 and 4 and an excerpt from side 3 of their 1973 album Tales From Topographic Oceans.

The final weekend of the UK run at the London Palladium on March 24 and 25 will include a 50th anniversary fan convention, with further details to be revealed in due course.

Artist Roger Dean will unveil new Close To The Edge paintings at the venue on March 25.

Guitarist Steve Howe says: “We want to mark this anniversary with a tour that encompasses some of our best loved work – we want to play things we enjoy, maybe songs we haven’t done in a while.”

Keyboardist Geoff Downes adds: “I feel enormously privileged be a part of the legacy of the incredible and unique line of musicians in Yes. The band has always remained fresh and inventive throughout its 50-year history, and created an amazing catalogue of music that has inspired millions from all generations.”

Drummer Alan White says that playing in the band for the last 46 years has been “a true labour of love” and adds: “I’ve always believed in the power of music and the band’s recent induction to the Rock And Roll Hall Of Fame and our Grammy award in 1985 are testament to the longevity of influence our music has had through the years.

“I’m extremely grateful to continue to be performing on stages for our dedicated fans and look forward to our 50th anniversary performing together in 2018. It’s been a great ride!”

Tickets will go on sale on Friday, September 8, from 10am via Bookings Direct, the venue box offices and via the ticket hotline: 0844 249 2222. Front row, Meet & Greet and VIP packages are available from Yesworld.

There will be no support at the shows. Find a list of dates below.

Beyond and before: What the future holds for Yes