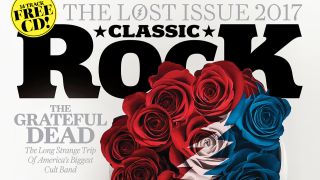 Our ‘lost issue’ kicks off with a fascinating insight into the colourful world of one of the world’s biggest cult bands, The Grateful Dead, and proceeds to take a look at neglected or overlooked scenes, people and music, running the gamut from jam bands to alt.rock to original line-up reunions thought to be lost in the vaults… until now.

Gov’t Mule
Warren Haynes has played in the Allmans and now makes sweet southern rock with these jam-scene stalwarts.

Mr. Big
The ‘lost supergroup’ are back with a brand new album. We caught up with Sheehan, Martin and co. to hear the latest.

Butthole Surfers
The lost band of misfits who played some of the most anarchic performances rock has ever seen.

Danny Fields
He signed the Stooges, managed the Ramones and introduced punk rock to Britain. Meet the real godfather of punk.

Cyril Davies
The lost bluesman nicknamed ‘Squirrel’, who helped The Kinks, the Stones and The Who find their way.

Alice Cooper
With members of his original band back on board, Alice has plugged into his prime-time past, reclaimed some lost songs and come up with a new album that’s classic and modern.

Ronnie Montrose
Ricky Phillips on the ‘lost’ album from the late, great guitarist.

Arthur Brown
We sit down with the God of Hellfire himself to talk aging, money and life’s simple pleasures.

Triggerfinger
The groovy Belgians are little-known here, but over in Europe they sell out colossal venues and fill in for the Foo Fighters.

Steven Wilson
We took the darling of modern prog record shopping in Soho. What did he buy? You might be surprised.

America Gods: Celebrating the best new offerings from the land of the free, plus some choice cuts with their hearts in the States. Including Shaman’s Harvest, Triggerfinger, Simo, Kenny Wayne Shepherd, Willie And The Bandits and more…

The Stories Behind The Songs: The Moody Blues
Justin Hayward looks back on the making of the Moodies’ biggest hit, Nights In White Satin.

Six Things You Need To Know About… Pond
Meet the trippy Tame Impala offshoot as they continue to defy easy categorisation.

Live Previews
Must-see gigs from the Temperance Movement, Danger Danger, Eric Bell, The Psychedelic Furs and Korn. Plus full gig listings – find out who’s playing where and when.

Heavy Load: Phil Lewis
The L.A. Guns man on not being posh, not holding a grudge and dating a Bond girl..