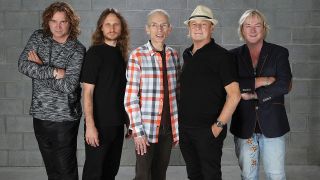 Ask Yes a question and you get five quite different answers. Actually, these days it’s even more complex than that. Two days after their induction into the Rock And Roll Hall Of Fame on April 7, ARW morphed into Yes Featuring Jon Anderson, Trevor Rabin, Rick Wakeman, and so now there are eight possible answers to even the simplest enquiries.

But for this half of Yes – what you might call Yes Mk 1, although Prog realises that this is a hugely contentious proposal – each of the five put their own spin on things.

Even when they’re asked where they are for this interview, Alan White explains that he is at home in Washington, still recovering but almost back to full fitness following his back operation last year. Geoff Downes is near Monmouth in South Wales. Jon Davison is in Lake McQueeney near Austin, Texas where his girlfriend’s niece has family. And Billy Sherwood is in Los Angeles. As for Steve Howe, despite being known to live in South Molton – and indeed having a phone code that confirms this – his reply is a somewhat enigmatic, “Hmm, let’s say ‘London’ for a change.”

There is no such obfuscation when quizzed about his erstwhile bandmates in this most combative of cosmic rock troupes, their respective antics at the Hall Of Fame and subsequent name-change. In fact, he discusses both in vivid detail, using language both damning and colourful. Unfortunately, the next day he calls Prog to insist on it all being retracted when it occurs he has said too much (see page 38). On the subject of the Yestival tour, which will feature Todd Rundgren and Carl Palmer’s ELP Legacy, however, he is no less loquacious, just more charitable.

“Todd’s written some great songs and never done anything ordinary,” he says of arguably America’s first and foremost prog rocker, happy with his choice as support alongside the sole surviving member of ELP. Sherwood is “very excited” to be touring with Rundgren – in 2002, he produced an album called Todd Rundgren And His Friends which featured the Runt’s vocals over performances of his songs by Dweezil Zappa, Edgar Winter and Steve Lukather among others. “I’m a huge fan,” he says.

Sherwood “never imagined in a million years” that he’d get the call from another of his heroes, Chris Squire, to follow in his footsteps before his untimely death in 2015.

“It was a really mindblowing time and it’s still surreal that he asked me to do what I’m doing, but I’m honoured,” he says. “It’s so strange to grow up worshipping your favourite band and one of the main guys who you’ve been idolising asks you to take his place.”

How have the fans taken to him?

“The general vibe I get is that people are on board with the idea. Part of that is, I think, is my relationship with Chris – they knew we worked together and were tight. There were some negative comments that leaned into the idea that now that Chris has gone there shouldn’t be a Yes and I’ve tried to explain that this is what he wanted.”

He laughs. “So do I go with your idea or Chris’? I think I’ll go with Chris and you’ll have to take it up with him.”

Compared to Yestival, the fifth annual Cruise To The Edge has a fuller line-up, which when it takes to the seas in February 2018 will include Palmer’s ELP Legacy again, Gong, Marillion, Steve Hackett, Stickmen, Martin Barre (of Jethro Tull) and Anathema. Howe says, “It is what it is: a madhouse of bands, some old, some young, some well-known, some not so well-known. It’s like a festival on water.”

What’s it like being stuck at sea with hardcore proggers?

“I’m among my own people,” decides Sherwood, who has already performed on a Moody Blues cruise, with the all-star The Prog Collective. “I’m a people person and I enjoy meeting the fans.”

“You get a couple of those,” Downes sighs of overzealous types. “Prog fans are a strange breed, as you know. You get weirdos in all walks of life but generally they’re all very respectful.”

“I can relate to those fans because I’ve been a prog fan,” Davison offers. “I enjoy it, and you try to be on-point most of the day, but by the end of the cruise I’m completely drained. It’s a good tired, though, I want to make that clear. It’s not a drag to be close to the fans. But I need to take a cruise after the cruise!”

“It takes some getting used to,” adds Howe of the close confinement. “We have controlled privacy. It varies from ship to ship whether we have restaurants only for us. There’s some avoidance of masses of fans and some interactions. But I’m very confident that our fans are not idiots or rowdy or drunk at nine in the morning. I instil a bit of trust and we get along.”

He pauses to reflect on the six days at sea. “It’s nice when we get off – ‘Ah, back on dry land.’ I was never designed for water activities – I’m not a terribly strong swimmer.”

Are package tours like Yestival and Cruise what – no pun intended – keep bands of Yes’ vintage afloat?

“Well, unless you’re up there in the big league, it’s tough,” says Downes, who notes that Yestival will find the band playing in venues ranging from 1,500 to 12,000, “A package featuring a few compatible bands can be safe.”

How do they feel about touring their substantial catalogue?

“We’ve always been the kind of band who push forward with new material, who look over the horizon rather than at it,” White says. “But it can be a lot of fun. We change our sets around; we’re still adventurous about what we play.”

As creative musicians, are they dying to get back in the studio?

“I need to be creative and in the studio – I thrive on that – and once I get a full belly of that experience I start missing being out performing, and vice versa,” Davison says. “You need the balance.”

“Everybody in the band has a certain amount of material they want to get off their heads,” White adds. “Maybe early next year, after the cruise.”

The drummer admits he enjoyed making Fly From Here (2011) and Heaven & Earth (2014), and has good things to say about their recent output.

“There are some classic songs on those,” he says. “Chris’ The Game [from Heaven & Earth] is a fantastic song to play. The Ladder [1999] has some great songs on it. Magnification – I had the pleasure of writing a song with Jon Anderson for that one called In The Presence Of. It was a lot of fun to make.”

Sherwood helped with the vocal arrangements and mixing of Heaven & Earth and generally likes all Yes records. “I don’t draw lines between different eras and line-ups,” he says, diplomatically. “I enjoy it all. Even [1997’s maligned] Open Your Eyes. I’m a diehard: what can I say?”

Howe has less positive things to say about Yes’ latter-day output: “Fly From Here was pretty good; Heaven & Earth was not so clever. The Ladder, Magnification and Open Your Eyes were not much fun. That era, so many musicians in the band were so sad and disappointed that they didn’t sell, and I wasn’t. I wasn’t surprised, because the old days, you don’t go back there – you remodel yourself for future work. Take the Rolling Stones, they still make new records. Do you like them as much as Sticky Fingers? I’m not drumming up a hornet’s nest here, just looking at it logically.”

Ultimately, White acknowledges the need to satisfy the band and the fans.

“We’ve got to please the public and come up with a new album,” he decides, “even though it’s a lot of work for us. We’re not spring chickens.”

Is it the ultimate paradox: the future-facing band spending much of their career looking back?

What does he estimate is the ratio of fans demanding nostalgia and new material?

“To be brutally honest,” he replies, “there isn’t the clamour to hear, say, the next Yes or Genesis album. Much as I think it’s important for a band to keep its integrity and make new music, in terms of the people that come and see you, they will always remember the great tunes they grew up and they formed the backdrop of their lives. Whenever we play tracks from the latest album they rarely have the impact of the classics.”

Howe isn’t aggrieved to be peddling nostalgia; far from it. “Not at all, no,” he says. “Some people have one album and that perpetuates their whole career. Yes and Asia and other bands I’ve been in have multiples of albums that are enjoyed, so it’s very rewarding to work those records that are accepted pretty highly in the lists of great and big-selling records. There’s no distaste.

“I need new music, and I keep writing,” he continues. “But with a band like Yes, the new albums will never be as well-received, even if we could make records like we used to, like Close To The Edge, which is almost impossible. And that’s okay.”

Even if Yes’ future is largely based on their past, there are still reasons to look forward. So what of next year’s 50th anniversary? What plans do they have?

“I’m not telling you,” Howe teases. “We have nice plans, moulding the shape of an idea that’s a little different. It’s important to have heard the fans say what they would like. We’ve been out there for nine years listening to what Yes fans like. The other lot,” he alludes to Yes Featuring… “have been going for nine months. They’ve got some way to go.”

Still, he says, he wrote to them before their tour, wishing them good luck. “That’s my true spirit: that anyone can play Yes.”

They all believe that their version of Yes is playing in bigger venues, and that they have their own musical agenda – according to Davison, Yes focus on the 70s while Yes Featuring…, with Rabin on board, are more 80s.

“We see ourselves as very different,” Howe insists. “What we’ve done for the last four to five years, and three of those with Chris, is be careful to play the music as it appears on the original recordings [on the album-replicating tours]. We’ve homed in on the actual early recordings and I don’t think that applies with the other group. They’re not so meticulous. Anyone is free to play whatever music they like. But we know what we like and we’re going to keep on doing that.”

Is there much chance of a Union-style reunion in 2018?

“No,” Downes states categorically. “I think that concept has been well and truly discarded by all concerned.”

“That’s a question above my pay-grade, to be honest with you,” Sherwood laughs. “I really respect all the musicians involved [in Yes ‘Mk 1’] and we’re having a great time out there. The band is sounding fantastic, the music is as fresh as when I heard it back in the day, and the fans seem to agree. Yes are in a good state right now.”

For their 50th anniversary, Yes will be continuing to honour the legacy and heritage of the band, as per the wishes of Chris Squire. Yes are working with Warners to celebrate the 50th anniversary, and the band will be touring around the world with a special 50th anniversary show. See www.yesworld.com for more.

Roger Dean: How I designed the Yes classic Close To The Edge