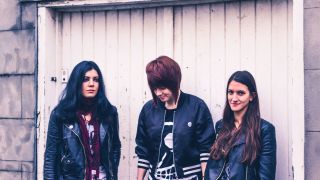 Bristol alt-punks are streaming the video for their new single, Lemons, only on TeamRock.

Lemons is taken from upcoming EP Pure Joy Of Life, due to be released on March 9. It is the first new material to be released by the band since their debut EP Vanity Loves Me was released last year.

Talking to TeamRock about the single, the band to us: “The idea behind Lemons is quite simply: have fun and don’t take life too seriously. Drink lemonade and most importantly, don’t suck lemons – we made Jenn test this theory in the video and she’s still not forgiven us…”

“The inspiration for the track came from a real life person. She was a rather uptight, obnoxious lady I used to have the joys of working with.”

IDestroy’s new EP, Pure Joy Of Life, is due to be released on March 9th