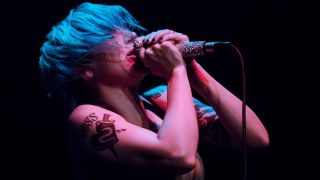 On the eve of the second annual Women’s March, I received a message from the booking manager of a venue in Hartlepool, UK which reminded me exactly why I’d be marching the following morning. What that message told us, in simple terms, was that the venue wouldn’t be booking us purely because we had a female singer.

No, this wasn’t the same venue who made headlines by banning female-fronted bands late last year. This was yet another booker saying the same thing. Our guitar player – and very bearded male – Robin Davey had reached out to the venue after people in the town had tagged the venue in a Facebook post, asking for them to book us there.

Their response was brief and the booker placed blame on the patrons by telling us that they didn’t turn out to see female-fronted bands and that “it must be an old working-class thing”. We pushed back, told them their policy was ridiculous and asked if this was truly their policy. They confirmed and told us they didn’t want to discuss it further.

It wasn’t the first time this, or something like this, has happened to us. However, a fire was lit in me that night, and I posted a screen shot of the message online. It blew up.

Before I posted the message, I’ll admit that I hesitated for a second, because I knew the repercussions that come with speaking out. We all do – that’s why women, or people in minority positions, often just carry on with their lives. Why say anything? Just get over it and move on. Even though I’m constantly facing adversity in my life, I still have privilege. If I don’t speak up, I’m not being true to myself.

I decided not to post the name of the venue or the full name of the booker, because this is not about them. It’s not about me, either; I don’t want it to be. I wish it wasn’t necessary for me to speak about this and I hope someday I won’t have to. But this is about what’s happening to women – not only in music, but in every industry, in every corner of the world. Women are seen as accessories to be seen and not heard.

(Don’t worry, this story has a happy ending, but we aren’t there yet).

The response to me speaking out was immense. Radio stations, magazines, bloggers, fellow musicians – both men and women – shared my post because they were shocked. How could this be happening in 2018? We received so much love and support from so many different and unexpected places. Festivals and venues from around the UK and United States reached out to offer their support, and even some festival dates, immediately. It was amazing and tumultuous all at once.

But we also got threats. Bookers told us they would never give us shows. We experienced negativity from fellow musicians – including one woman – who told us we shouldn’t have shared a “private message”. We didn’t respond to any of the hateful messages, except to that one woman. I asked her, “If we don’t stand up for each other, then who will?” She didn’t respond.

What was also hurtful was the silence – the silence from many of my male musician friends in the rock and blues worlds I exist in. I understand they want to protect what careers they have, but at what cost?

With the support – which far exceeded the hate – came an abundance of similar stories. Women started posting their own experiences, and messaging me with eerily familiar tales of misogyny within the music industry. One detailed the head of a department at a major record company telling an artist “We haven’t put money into a female-front rock band in over 30 years, what makes you think we would do it now?” while others documented sexual harassment and rape. For women of colour or trans individuals, it was infinitely worse. The stories were horrifying.

So, if you want to know why there aren’t many female-fronted rock bands out there, it’s because it’s almost impossible for us. As if being in a band isn’t already an enormous hurdle no matter who you are, being in a band as woman in a male-dominated scene can be soul-crushing.

So where’s this happy ending? Well, the most inspiring part of all of this for me was the amount of men and women who were shocked. Men who honesty had no clue that women were really being treated this way, and who were outraged to learn about it. Outraged for us and for their wives, their sisters or daughters. Many people used their voices to speak up and communicate that this behaviour and mindset will not be tolerated, especially within the music community.

Music is supposed to be a family: a safe, healing vessel that we all share, not a dumping ground for an individual’s hate. Like I said, this has happened before. I’ve told people about it before, so what was different this time? The difference is that people cared. They really did. And to me, if we can all support each other like we were supported that day, that is the sign of a very happy ending somewhere in our collective futures.

Doro: All metalheads – men and women – must fight for our music

How Nightwish’s Floor Jansen hit back at sexist attitudes