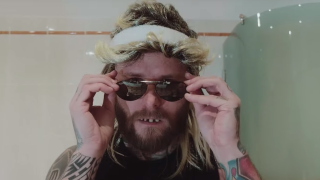 The Kris Barras Band have released a hilarious new video for What A Way To Go.

The clip for the song from the British rockers’ 2019 album Light It Up finds singer and guitarist Barras donning mullet wig, false teeth and other costumes to play a range of characters.

Says Barras: “The original plan was to have a good mate of mine play the main character. He would’ve been perfect as he has an amazing mullet! However, he had an accident and broke his collarbone a few days before we were due to start filming. So I made a quick pit stop at a fancy dress shop and we went to work. We had a lot of fun making it.”

Check out the clip below.

The Kris Barras Band have also announced their debut European headlining tour. They play the Legends Of Rock Festival in Great Yarmouth on March 6, before hitting the Netherlands, Germany, Austria and Italy.