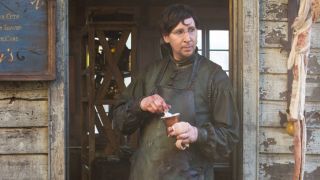 Marilyn Manson features in a teaser trailer for the third season of Salem.

The shock rocker plays Thomas Dinley, a “barber and surgeon who is the go-to man in Salem, from a shave and a haircut to being leeched, bled, sliced open or sewn up,” according to the show’s official character description.

The third season of the supernatural drama series premieres on WGN America on November 2.

Manson says: “My character ends up being something that could be called the devil’s advocate or the devil’s best friend. He has no moral balance.

“The place where Dinley operates his business is not dissimilar to my home. I collect a lot of medical devices.”

Though series creators Brannon Braga and Adam Simon didn’t write Dinley’s character with the rockstar in mind, Braga says that Manson “brought the character to life instantly” with his “inherent, exquisite weirdness.”

He adds: “He’s Vidal Sassoon and Jack the Ripper. And there’s definitely some Sweeney Todd mixed into the character as well.

“Don’t be surprised if you see a meat pie or two.”

Manson has previously had roles in TV shows Sons Of Anarchy and Californication, and plays a Native American hitman in film Let Me Make You A Martyr.