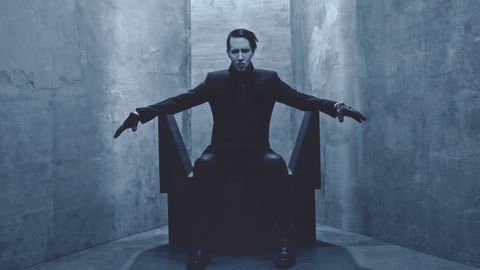 Marilyn Manson, both the man and his musical outlet, are very different beasts in 2015. After all, it’s now over 14 years since the self-proclaimed God Of Fuck released Holy Wood, the final chapter of his tenure as one of the most controversial, vilified characters in music, with his band’s caustic industrial metal an apocalyptic soundtrack to his apparent corruption of youth and erosion of the American dream that terrified parents and moral authorities the world over.

Since the pomposity of 2003’s patchy The Golden Age Of Grotesque, Manson the myth has sadly overshadowed his musical output, with tabloid conjecture and other pursuits garnering far more attention than some forgettable albums and bewilderingly shoddy live performances. 2012’s promising Born Villain, however, was a curveball, combining the sheen of his predecessors with the stomp and edge of yesteryear. The album firmly helped people to remember what they loved about the band in the first place, and resulted in its successor, The Pale Emperor, becoming a focus of attention and expectation that has eluded Marilyn Manson for over a decade.

The ominous crawl and low-end thrum of Killing Strangers announces that, if nothing else, the band has lost none of its blacker-than-black humour and lyrical venom, taking aim at America’s ridiculous gun legislation with the pitch perfect ‘We’re killing strangers so we don’t kill the ones that we love’, while new collaborator Tyler Bates’s six-string twang rings out in dissonant grandeur. Deep Six is arguably the punchiest number since …Grotesque and long-time fans will no doubt revel in the jagged stomp of the main riff as Manson himself yelps through the chorus, flanked by yet more menacing undertones and classic leads that could be lifted from an AC/DC record.

However, this is but a false dawn for anyone expecting a full-on homecoming, with the rest of the album instead continuing to successfully see the band building on the range of sounds and ideas they’ve been flirting with for a decade now. There’s the rock’n’roll strut of The Mephistopheles Of Los Angeles; The Third Day Of A Seven Day Binge’s morose textures that perfectly encapsulate the song’s theme; rumbling rhythms and sheen of The Devil Beneath My Feet; and dark country liaison of Cupid Carries A Gun, all wrapped in a veil of darkness that stays with you long after the curtain call. Best of all, the tragic Warship My Wreck’s electric beats and subtle piano, gloomy and glorious in equal measure, result in the band’s finest tune in many a year.

Whether it’s a ‘return to form’ or ‘comeback’ in the classic rock’n’roll sense all depends on whether you make of Marilyn Manson’s career, be it the monstrous public enemy of his raucous formative years, or an ever-evolving artist of multiple layers and personas in the mould of his idol, David Bowie. Either way, The Pale Emperor’s real triumph is that it firmly …re-establishes Manson’s ability to, on occasion, still be a relevant musical force.

Marilyn Manson - In His Words

“I’ve always been about being a ball of confusion, just to set people scattering, because that gets people talking. I think I’m the source of conversations in many households, causing confusion between parents and children, and inspiring anger among religious groups, and that in itself is an important part of culture. I get people thinking.”

ON THE PROCESS OF REMAKING AND REMODELLING (2012)

“After The Golden Age Of Grotesque I was on a roll and satisfied with my music and my art shows, and it just seemed to go wayward after that. It’s been a period of me figuring myself out and rebuilding. It takes a lot to humble yourself and admit that you’re making a comeback.”

“Our show is very cult-like… very political. [It] starts with Columbine, the hill of dead kids, which I got blamed for, as my backdrop. Then it shifts into the glam rock part with drugs, then it shifts to the fascism part. It mimics my career. I started out as a troublemaker. I was doing something people could identify with, then I got blamed for doing exactly what I was saying not to do. I think all the people who were listening to music understood it, and the people who were just posturing and being political were using me, simply, as a scapegoat. So this show states my career. Trouble, glam rock, drugs, fascism, anger, hatred, repeat.”