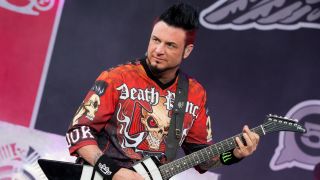 Jason Hook says Five Finger Death Punch are about halfway through making their next album.

The band are working on the follow-up to 2015’s Got Your Six. And what will be their seventh album will be their last for Prospect Park after their public falling out with the label. They will work with Rise Records once their obligations to Prospect Park come to an end.

And in an interview at Heavy Montreal, which can be heard below, guitarist Hook says the band couldn’t wait to get started on the record.

He says: “We’re probably about half done. We’re workaholics, we went right back in the studio. Every time we talk about taking a break it just doesn’t feel right. Sitting around it just feels like we could be doing something.

“We’re always concerned that we might lose momentum or that people will stop caring. I think we’re overachievers by nature.”

The row with Prospect Park included a claim by the label that the band were attempting to cash in on singer Ivan Moody’s substance abuse problems – a suggestion the band strongly deny.

With Moody sober, Hook says the band are in a good place.

He adds: “Of course we’re always paying attention to how Ivan is doing. But everybody moves at different speeds. He likes to get up and work from 6pm to 5am, everybody’s different and you have to allow them to be themselves and do what they do best when they are comfortable.

“We can always make tons of music and he comes in when he’s comfortable and starts layering himself on top. And he’s better than ever right now, he’s been great.”

Hook blames Moody’s problems partly on the demands placed on the band while on the road.

“Nobody can really understand the feeling when you’re on tour,” he says. “It sounds like it’s one big party but it can be very tiring. Everybody wants something, like, ‘Hey I’m doing a solo record, could you do a solo.’ Or, ‘Hey it’s my wife’s birthday, can you call her?’

“Everybody wants something and it can become overwhelming. Sometimes people find ways to relieve the stress.”

The full interview with Jason Hook is set to appear on an upcoming episode of One On On With Mitch Lafon.