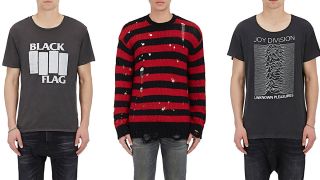 A New York department store is selling Black Flag and Joy Division t-shirts for $265 and $225 respectively.

The Black Flag t-shirt costs $265, while the Joy Division Unknown Pleasures top goes for $225. Both are made by R13 and are on sale at Barneys New York, along with a distressed “grunge sweater” which retails for $595.

Barneys is the store behind the Justin Bieber/Marilyn Manson ‘Bigger than Satan’ t-shirt which sells for $195.

The bands are unlikely to make any money from the t-shirt sales. Black Flag’s logo has been at the centre of various claims over the years, while the Unknown Pleasures art is said to be a copyright free image.

Rob O’Connor, creative director at Stylerouge, tells the Guardian: “You are the intellectual property owner of the work, according to the 1988 Patent Act, until you sign that right away.

“There might be nothing in writing to say you created it, or someone may have redesigned it slightly and then it’s credited to someone else. Or an old manager or record company could have extended the copyright without asking.”

The original t-shirts would have cost much less than their modern, high-end copies. The R13 versions are made from “brushed Japanese cotton cashmere” and David Bowie and Run DMC tops are also available at similar prices.

The 10 most offensive band t-shirts ever