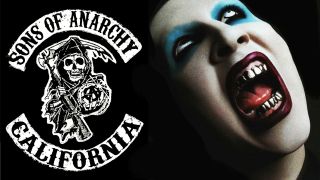 Marilyn Manson has been cast to appear in the upcoming season of hit US TV show Sons Of Anarchy.

The shock-rock icon will play a white supremacist called Ron Tully in the show’s seventh season, due to start airing in September.

The musician – a fan of the show which stars Charlie Hunnam and Katy Sagal – says he took the recurring role to please his dad, adding: “Sons has been such a big part of my life, as well as my father’s. So I was determined to make him proud by being involved in what will probably be remembered as the most amazing piece of television cinema.

“After all, the very heart of SOA is about that relationship. So, now all I need is a motorcycle.”

The show follows a fictional criminal motorcycle gang in California and has been a massive success since it launched in 2008 on the FX channel.

SOA has a history of casting rock stars, with Henry Rollins and Dave Navarro having appeared in previous seasons.

Manson lost his mother just a few weeks ago after a battle with dementia. He has acted before, including roles in Eastbound And Down and the 2003 film Party Monster.