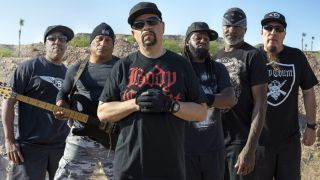 Body Count have released an animated video for their track The Ski Mask Way.

The song features on the band’s new album Bloodlust which was released at the end of March via Century Media Records, with their latest video clearly inspired by the Grand Theft Auto series of video games.

Speaking recently with TeamRock, Body Count leader Ice-T said: “When we put out the first Body Count album it was before the riots. Rage Against The Machine and all of us were in the pit. It was time.

“I think that time’s come around again, that people are tired of hearing about partying in the club and all the bullshit. Hopefully we’ll strike a match that gets people excited.”