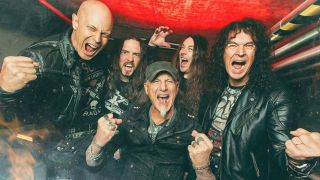 Accept have released a video for their brand new song The Rise Of Chaos.

It’s the title track from their upcoming 15th studio album which will arrive on August 4 via Nuclear Blast.

The promo was shot at Nashville’s Soundcheck rehearsal centre and consists of 81,127 still images that were later stitched together to create the finished video.

Guitarist Wolff Hoffmann says: “The Rise Of Chaos is something I have been thinking about often. Wherever we go there is some hidden as well as some visible destruction and it kind of changes the world we know.

“What was there today can be gone tomorrow and it’s somehow irritating, because it happens on so many levels and no one knows what comes next.”

The Rise Of Chaos is now available for pre-order, view the cover art and tracklist below.

Accept will embark on a run of tour dates starting on August 3 at Wacken Open Air. They’ll then travel to the US, Japan, Australia and South America for further shows.

Accept The Rise Of Chaos tracklist

Wolf from Accept answers your questions