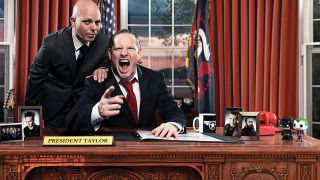 Has Corey Taylor lost the plot? Is Stone Sour really a democracy or has their leader become a dictator? And what’s up with all the cock rock? In the new Metal Hammer, we find out what the hell’s going on in camp Stone Sour – and yes, you better believe Metal’s Favourite Bigmouth let’s us know exactly what he thinks – and so does his VP Josh Rand. Huge.

Stone Sour try to make metal great again in our new issue! Has Corey lost the plot? Is Stone Sour a democracy or a dictatorship? And what’s going on with the new album? We find out!

We pay a special tribute to Chris Cornell, written by Hammer legend and his good friend Mörat. There will never be another like him.

We hit the road with Avenged Sevenfold on their gigantic US tour with Metallica. What are their secret plans? We find out…

Employed To Serve might just be the most important band in UK hardcore right now. We unveil the method behind their noisy madness.

We nip Stateside to hang out with In This Moment and get to see their huge new show!

And ask if Decapitated have what it takes to break out of the underground for good.

Oh, and there’s also all the gossip and chaos behind the scenes at this year’s epic Golden Gods. You won’t get this anywhere else!

Oh and we also spent a weekend at Danzig’s own festival. It was… freaky.

All of this plus our massive Download 2017 review, Iron Maiden’s new comic book, Nifelheim, Municipal Waste, Iced Earth, Noise Records and much more.