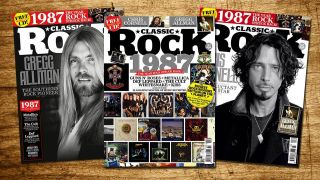 1987 was the year of the era-defining album, the generation soundtracking debut, the career-defining mega-hit and the career-saving belter-on-a-budget. With these and many more, it was also the year that delivered some of the greatest music of the 80s. Including…

Whitesnake: 1987 The album that took David Coverdale from Redcar to Rodeo Drive and, with Tawny Kitaen at his side, MTV stardom.

The Cult
Down and looking at out, in 1987 they delivered out-and-out rock album Electric and sparked off a revolution.

Helloween
With Keeper Of The Seven Keys they were poised to be metal’s Next Big Things. But they split, and the bitterness lasted for decades. So what brought them back together

Midnight Oil
The fiercely political Aussies have been sorely missed. Now they’re back with a slew of reissues and a huge world tour.

Guns N’ Roses: Appetite For Destruction
“They don’t sound like any other band. It’s just timeless.” Manic Street Preachers’ James Dean Bradfield looks back at the debut album that soundtracked a generation.

Metallica
At the start of 1987, they were on the edge of a crisis. Then they saved their career with $5.98. What a bargain!

Kiss: Crazy Nights
“Any album that produces a song like Crazy Nights is good for me!” Paul Stanley talks about Kiss’s UK breakthough.

Gregg Allman
Classic Rock looks back on the life and legacy of a southern rock legend, who died last month.

Chris Cornell
Even as Soundgarden were beginning to break out of the Seattle scene, he stood apart from his peers. Classic Rock charts the rise and tragic death of a true star.

Eric Gales
He’s the guitar world’s best-kept secret, praised by A-listers, who lost decades to drugs and trouble with the law. Now Eric Gales is back on the right side of the tracks.

Todd Rundgren
He says he’s a hard-worker more than a genius, that timing is everything and that music has been devalued. These things and more shape his world view.

Ramble On
Get ready for the Ramblin’ Man Fair in Maidstone with our pick of 15 of the best summertime songs from this year’s festival’s finest, including Black Star Riders, Rival Sons, Monster Truck, Blues Pills, The Vintage Caravan and Supersonic Blues Machine…

The Stories Behind The Songs: Bad Company
“Basically a spaghetti western set to music” Bad Company gave the band their theme song and gave rock a classic.