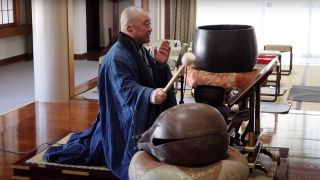 The internet is filled with people performing the unlikeliest of cover versions, from Ukrainian folk artists B&B Project performing Rammstein songs, to Guns N' Roses' Sweet Child O' Mine enlivened by a group made up entirely of thumb puppets.

The latest musician to baffle normality is a Buddhist monk who goes by the name of Kossan, who's developing something of a reputation for performing Western rock songs on traditional Japanese instruments.

So far Kossan – real name Kazutaka Yamada – has filmed himself playing versions of Queen's We Will Rock You, The Beatles' Yellow Submarine, and, in a stroke of weird brilliance, The Ramones' Teenage Lobotomy.

Not much is known about Kazutaka, although we know that he lives in New York where he teaches Zazen, a meditative discipline of the Zen Buddhist tradition that aims to provide practitioners with an insight into the nature of existence.

In 2007 he was interviewed by My Eyes Tokyo, and said, "When I came here, I was broke. Everything is expensive in New York so I couldn't hang out. I hesitated to even take subways. I enjoyed nothing but practicing the sanshin [a Japanese banjo-like instrument].

"After coming here, I started to practice it almost everyday then I could play several songs in October. One day I went to Central Park to practice outside. When I was playing the sanshin on a bench, a guy gave me a dollar. I was surprised because I didn't expect that at all. I was playing it there only because it was a nice day.
I thought that there was someone who pays for the music I played.

"It really encouraged me. I played in Central Park until that evening and went near the Empire State Building after that. I played the sanshin until late night and I got US$40 in one day. I dreamed of being a professional drummer when I was a college student and I actually made money by playing music. I felt I was making my living so it was really fun."