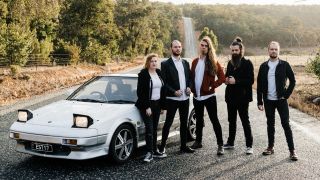 Australian prog rockers Voyager have been forced to pull out of next year's Prognosis festival.

In a statement on their Facebook page the quintet, who released their latest album, Colours In The Sun, earlier this year, stated a lack of suitable booking opportunities around the festival date has meant it's financially not viable for the band to make the huge journey from Australia.

The band say: "It’s with a heavy heart that we have to announce that we will no longer be performing at Prognosis Festival. We made various attempts to book surrounding dates for this festival with more than enough time, but the stars did not align for us this time around. Unfortunately it was too much of a financial risk to fly from Australia for just one show. As such, we had to make the decision to cancel the festival, as if we performed, it would leave us financially restricted for the remainder of the year and wouldn't allow for us to tour our new album internationally at all.

We’ve decided to stay in Australia for the beginning of 2020, and return to Europe in the summer, allowing us for more time to prepare. Announcements on that front coming soon.

We’ve never cancelled a show in our entire career, and hope that we can make it up to you. We will be using this time to enhance our live production and performance to take it to the next level for when we return.

We’re sorry to the organisers and fans who were hoping to see us."

Next year's Prognosis Festival takes place at the Effenaar in Endhoven on March 20 and 21, and will feature performances from Anathema, Enslaved, Katatonia, Bruce Soord, Focus, Don Airey, Sons Of Apollo and more.