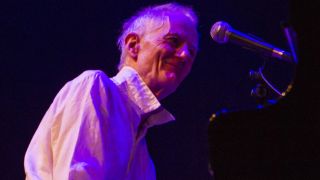 The venue say in a statement: “Making a mockery of genre boundaries and consistently confounding expectations, Hammill’s work spans numerous styles and approaches while always maintaining his own unique sound.

Van Der Graaf Generator recently released their 13th album Do Not Disturb via Cherry Red Records, with Hammill revealing that they were determined to create something special because it could turn out to be their final record.

Hammill says: “We do have the realisation that, okay we are all healthy at the moment, but we are all rising 70 now. And maybe this is the last record that we’ll make.

“The minute that phrase is out there, that imposes a kind of discipline upon you to do something…I’m definitely not saying this is the last record we’re gonna make, but it is one that we had that idea at the outset, which we didn’t have, for instance, on the last couple of records.”