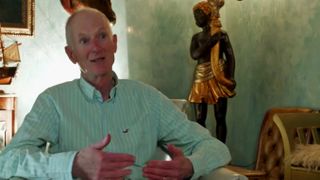 Van Der Graaf Generator’s Peter Hammill said the band were determined to create something special on their upcoming new album Do Not Disturb – because it could turn out to be the last record they ever make.

In an interview with Cherry Red Records boss Mike Powell, premiering exclusively with TeamRock, Hammill says the veteran prog heroes put extra pressure on themselves when writing and recording their 13th album as they may not make a follow-up.

In a 30-minute video interview, which can be viewed in full below, Hammill says: “We do have the realisation that, okay we are all healthy at the moment, but we are all rising 70 now. And maybe this is the last record that we’ll make.

“The minute that phrase is out there, that imposes a kind of discipline upon you to do something…I’m definitely not saying this is the last record we’re gonna make, but it is one that we had that idea at the outset, which we didn’t have, for instance, on the last couple of records.”

The singer and multi-instrumentalist also reveals the band rehearsed new material at length before starting recording sessions for Do Not Disturb, as they did not want to play any of it live until they were 100% happy with it.

He adds: “What’s impossible to do these days, as we did for instance on the material on Goldbluff back in the 70s, was that we went out and played all of the stuff live about a month, six weeks before we went to record it. So there was more of a familiarity with the stuff.

“You can’t do that now. Well, you can do it, but unfortunately within 10 minutes of the first show having finished, it’s gonna be out there on the web. From my point of view, I do like the idea that you finish the work before you present it to the public.

“Having the rehearsals meant that we were able to explore other ideas, and then have a week to worry about it before we recorded it.”

The band previously said Do Not Disturb features some of their most technical work to date, and in the latest interview, Hammill discusses the live dynamic that exists between him and bandmates Hugh Banton and Guy Evans. He says that while they might make it look easy, it isn’t always as simple as that.

“We do set ourselves challenges, among which is an abiding challenge for Van Der Graaf which is not to display the fact that something is very difficult,” he says.”

“We’ve never liked the idea of, ‘This is the very difficult bit, chaps.’

“We like to pretend that it’s all going smoothly, even when there’s a lot of frantic paddling under the water.”

Do Not Disturb is released on September 30 via Cherry Red Records.