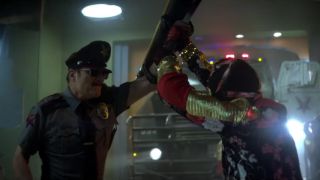 A still from the trailer

The movie is based on the graphic novel of the same name by Joe Casey and Chris Burnham, with the trailer following a short clip which was premiered in June this year.

Crahan directed the film which stars Sons Of Anarchy’s Kim Coates who plays the lead character – a Los Angeles cop who is killed in the line of duty but repeatedly resurrected by the government to fight crime across the city.

The trailer shows gun-toting nuns and Officer Downe taking on sword-wielding gang members. Watch it below.

He added: “My producer sent me a review the other day, and it said it was such a twisted, sick, horrendously dumb movie that it seemed like a 12-year-old delinquent directed it, and that the reviewer was ‘seriously concerned about anyone who had anything to do with this movie, or anyone who likes it.’”

Officer Downe also features other members of Slipknot – with Crahan saying they didn’t get a free pass to appear on set.

Officer Downe will be released in cinemas and on demand on November 18.

Why Slipknot's Clown made his new movie Officer Downe